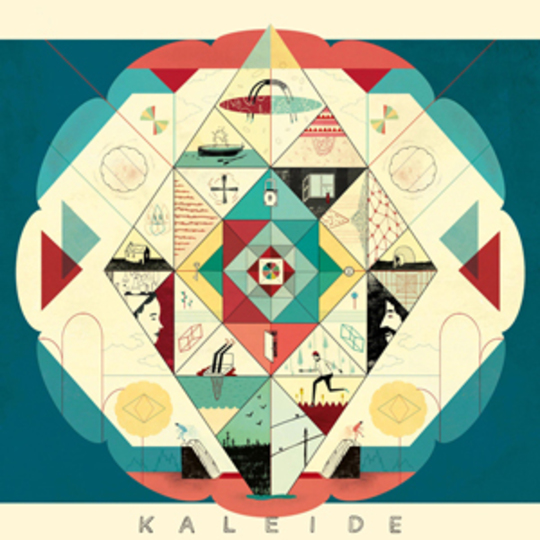 It's pretty easy to see Sky Larkin as part of a wave of British bands – along with Los Campesinos!, Slow Club, Johnny Foreigner – bands who may not share similar sounds, necessarily, but who do share a certain ethos. Their outlook is more globalised; they all seem to draw more from American indie than its British counterpart. More Pitchfork than NME. As in, do these bands have more in common with Pavement, or Blur?

Helping that lazy journalistic grouping (I ain't giving it a name) is the fact that the bands all seem to be friends with each other, and all are at a similar stage in their career – readying or recently releasing their second records. And so it comes to Sky Larkin's turn, with the sequel to The Golden Spike - sequel being the apposite word. Kaleide is no great genre leap forwards. Many of the tracks here could slot back into their debut without too much jarring – 'Kaleide', certainly, could easily sidle in between 'Molten' and 'Antibodies', with its cruising riffs, sing along chorus, attractive surface and gritty core. On the surface this is pop, of a sort, but underneath lies heavier, punkier influences (although it does not, thank god, rawk).

That's not to say things aren't more developed - one listen to (first single) 'Still Windmills' shows the progress. The guitar's strutting opening, Katie Harkin's shushed out “Why wait?” over a silent break before the noise rises again, restless, flitting between moods, world cup drumming, how it doesn't have a real chorus but still sounds like it does...

Given that they have worked with John Goodmanson (also producer of Los Campesinos! recent efforts) again, these improvements are the result of improved musicianship and greater confidence, rather than production sheen. Nestor's drumming is booming throughout, whip tight and complex, the driving force, Doug's bass filling the gaps, binding the parts together, Katie's guitar slices, or strums, or sprawls. 'Spooktacular', all frantic rushing to the end, drums thrashed typifies the progress – it's far heavier than anything they've previously done, while 'ATM' goes the other way, gentle, beautiful (until a grand guitar solo unfurls at the end), pondering “Whether a selfish heart is a truthful muscle / Or not.”

Despite the clear influences of classic American indie on their sound, the lyrics are still resolutely British - Harkin still enjoying the play of words - “I know it's a precipice / Not saying it's a piece of piss” on 'Still Windmills', or “Was I harrow to the marrow / When I fell shallow to the shock”, on 'ATM' being the bestest examples, following the fine example of “Sentiments stretched over sediment and soil” on 'Antibodies'. It is one of the strengths of Sky Larkin, and their aforementioned peers, that they blend the great musical components of the US scene with those British sensibilities.

To break away from the analysis, the main point about Sky Larkin is that this music is enjoyable just for what it is – great indie. It doesn't need dissection of what makes it so, it just needs acceptance, acknowledgement of what it is, lest the spell be broken, lest we break it by taking it apart. Kaleide is immediate and it rarely dulls, bar the slow start to 'Anjelica Huston', before it bursts out into sparkling keyboards at the tail end. That passage, and the sparse guitar and filtered drumble of 'Smarts (shh version)', show where the band can move on to, progressing away from the template, outwards. For now though, we can just stare up at Sky Larkin, listen to the music, love the music, repeat, repeat, repeat, fade.