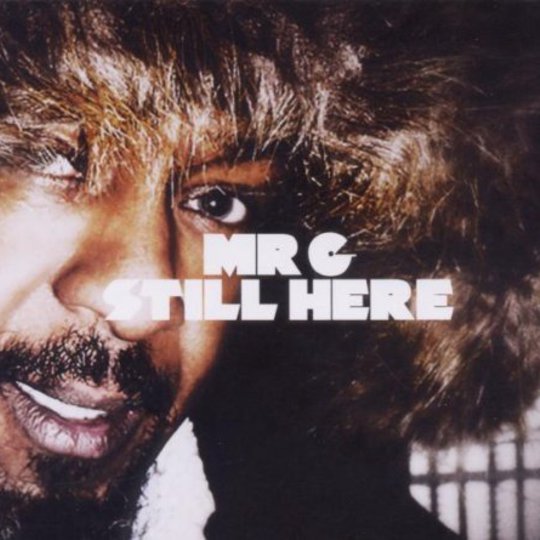 It’s possibly apt that this album has made me feel old, given that it’s been released by Rekids, which primarily releases house music whose core audience is men in their mid-30s who drink Staropramen and do their top shirt button up. (That’s not really a zing, before you get antsy: this particular demographic has far better taste in dance than the kids, especially right now.) It’s not the actual tunes supplied here by Mr G, real name Colin McBean, which prompted this, though – more that it caused me to think about when he was a member of UK techno institution The Advent, and appeared to spend most of their sets dancing around Bez-ishly rather than actually playing much music. Rightly or wrongly, I still pretty much associate McBean with The Advent, even though he left in 2001 and has largely eschewed their remorseless, steely thumping in favour of a more soulful, subtle strain of house.

With nine tracks spanning 73 minutes, Still Here sets itself up as your archetypal house album for connoisseurs of the genre – it is Mr G’s first full-length under this name, despite having released four or five 12-inch singles a year for the past decade, so it’s understandable that he might take the opportunity to be indulgent. Not that we find him expanding his horizons vastly, in terms of style – his eyes and ears are on the dancefloor at almost all times, as he swings between deep house, spiky tech-house and occasional forays into sterner, Jeff Millsian techno. From its title onwards, opening track ‘Blessed’ hints at some kind of spiritual bent, without ever explicitly setting out its stall. “Deeper inside myself / I journey inside myself,” a female voice intones, over casually funky drum patter and ghostly piano. Reminds me of Terre Thaemlitz, which I’m more than okay with.

In the album’s liner notes, McBean talks of how Still Here started to come together 'at a very low point in my life,' but perked him up a treat as it took shape. As such, there might well be some underlying concept linking these tunes, or at least some tangible attempt at a ‘journey’ from mood to mood. While the BPMs increase during the album’s second half, and techiness prevails over deepness, you could probably rearrange these nine cuts into pretty much any order without losing too much feeling. Ultimately, it’s just one tasty electronic slab after another, constructed with experienced hands.

In order, then, after ‘Blessed’: ‘Firewater’, pingponging middle-of-the-night minimal techno with infectious stabs of bass and a looping, muttered vocal. ‘Dark Town Orchestra’, which is almost literally tribal house insofar as it prominently features a synthesised version of that sound that kids playing cowboys and Indians make by clapping their hand over their mouth and going 'woowoowoo' (I realise this practice is culturally offensive, but that is what it sounds like). ‘Platonic Solids No.5’, the album’s closest appropriation of Detroit techno and made extra shivery by the repeated vocal “Darkness is calling me / I can’t control these feelings”. ‘Get On Down’, arguably the nearest the album comes to ‘commercial’ house – not that that’s a crime, let alone an easily defined notion, but you could imagine this in the middle of a mix by Sandy Rivera or someone like that.

‘Space-Bassed’, pretty much straight-up Nineties-styled techno which, when the sirens come steaming in, could pass for something off one of McBean’s old Advent releases. ‘Lord Have Mercy’, save for intermittent synth twinkles entirely percussion-based, and unlikely to excite many in a non-club context. ‘Light’N’Shade’, the sort of relentless deep tech-funk that you’ve heard a hundred times before (at least, if you fuck with the output of labels like Tresor, Axis, Downwards and so forth) but, when it’s done well is a time-honoured treat. ‘Stolen Moments’, the closing track, whacks the tempo right down by way of shuffling drum patterns and ambient house languidity, sending us more or less full circle and offering a beguiling end to a solid if unrevolutionary opus.