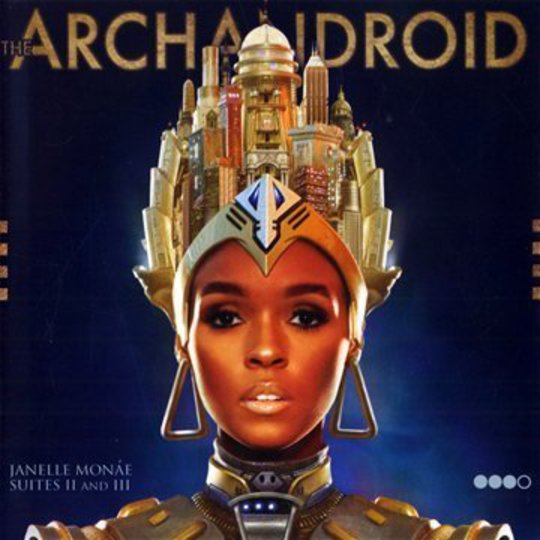 The 'plot' of Janelle Monáe’s The Archandroid revolves around Cindi Mayweather; a character embodied by the staggeringly varied talents of Monáe herself. Cindi is actually cloned from the DNA of Monae, who had been kidnapped, cloned and then sent back to our time in the 21st century. The Archandroid is snippets of Cindi’s effort to realign the wrongs made in the year 2719 in the city of Metropolis by the Great Divide, 'a secret society which has been using time travel to suppress freedom and love throughout the ages'. It’s Cindi’s duty to bring them down. And, by default, Monáe’s to formulate an idea of the error of their ways.

So, a thinly veiled jab at our own current social dysfunction it may be, but such demonstration of Monáe’s politics in a creative form is not only massively ambitious, but wholly endearing from the off. Considering we are so vehemently pummelled with tales of California girls being so hot they’ll melt our popsicles, there may yet be hope that intentionally universal music doesn’t have to be completely devoid of intelligence or ridden with innuendo. And maybe, just maybe, Janelle Monáe is that hope.

But of course, what you really want to read about is the music, isn’t it? Well, regardless of allegorical meaning, it’s brilliant; pretty much all of it. Even without the facade, Monáe has managed to flawlessly meld her influences into an unstoppable pop album that seems to have come from nowhere. Opening up with the phantasmagorical orchestrals of her first overture, ‘Dance or Die’ (featuring alta-ego partner Saul Williams) then plays off funk basslines, softly spoken diatribes and haunting dub-like vocal licks before weeping effortlessly into a beautifully spaced out chorus. Ambition is everywhere, but it's never threatening and always entertaining.

It’s at this point that you just have to take a step back. There’s this whole new world surrounding you; a world where the air you’re breathing has an entirely different, yet cleaner taste. This was meant to happen; it had been built this way. But you just don’t know how you arrived here. It’s Monáe who created this world and seems to have done so with minimum fuss but maximum detail, placing you at its centrepoint, its axis. She has brought these apparitions back with good reason: to remind you just what the right amount of soul can do to any musical template, conceptual or otherwise. It’s just down to you to close your eyes, envisage what you want to and take the ride.

Of course, it still has moments where the songs go straight for the jugular. The first 15 minutes flow by in a manner reminiscent of Michael Jackson at his Off The Wall best. ‘Cold War’ owes more than a little to Outkast’s ‘B.O.B’, but Monáe has made no bones about her love of the duo, with Big Boi taking her under his own talented wing from nigh-on the beginning. And besides, when backed up by an all conquering monster of a track like ‘Tightrope’, the comparisons kind of falter - it’s impossible to ignore the fact you are in the midst of the first true pop classic of 2010.

Again, the superlatives and big thought were there from the beginning, and it really only takes you that long to see why. ‘Oh, Maker’ allows Monáe’s voice to soar over a beautifully jazz-chord led chorus, again dragging those early-Jackson apparitions along for the ride. Not one to take you off your toes, it seems, the punk and psychedelic double header of ‘Come Alive (War of the Roses)’ and ‘Mushrooms & Roses’ are a touch jarring, but only highlight further the willingness to go out on a limb that is so rarely seen by many a popstar of this generation. A collaboration with of Montreal, as well, comes completely out of leftfield (did you expect anything less?), so it’s down to ‘Wondaland’ to reaffirm her talents at their straight-forward yet beguiling best. As the Twin Peaks jazz of ‘BaBopBye Ya’ sends you back to The Right Dimension, you realise pretty swiftly that nostalgia will do you little favour. You must return to this world. And fast.

It’s been pretty difficult to articulate my thoughts on this album to their fullest capacity. It may not seem restrained, but trust when I say that nothing less than a dissertation or thesis will suffice for such a mind-bogglingly massive album. The most essential point for most will be that everything about Janelle Monáe screams ‘SUPERSTAR’. Yes, it may be clichéd to say such things, but sometimes inevitability is just that. Hopefully this level of retro-furturistic and thoughtful creativity can be retained throughout what will undoubtedly be a very long career. But the real question is, why can’t all pop be like this now?