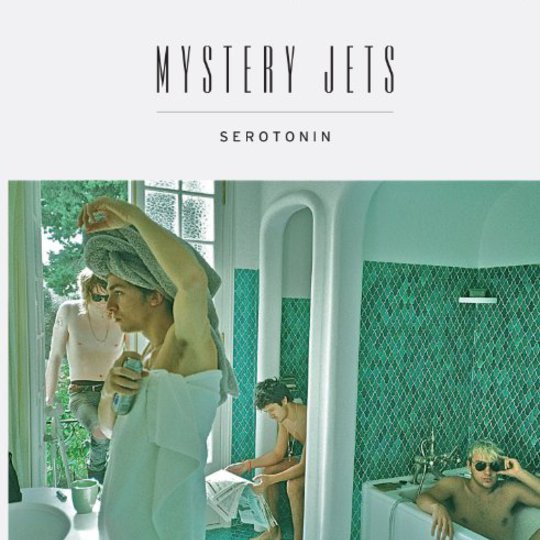 It's been a pretty bad fortnight for those who like public services, the public sector, welfare, the poor, and the middle classes, thanks to our wonderful chancellor. We all have to accept the cuts – our economy is in danger of doing a Greece or something. Now is not, therefore, a time to take financial risks. Mystery Jets have taken the lessons of the recession to heart. Serotonin is not a record that has a place for a 'Zoo Time', or a 'Diamonds In The Dark'; this is no time for risks. The Eel Pie Island collective have decided that now is the time for classic Eighties pop. Given the musical predilections of the past few years, this is a safe bet.

For those fans put off by the 'mainstream' stylings of Twenty One, look away. There is nothing for you here. Mystery Jets have firmly positioned themselves as a pop band now. Most songs last around three and a half minutes; they all have choruses. They also often keep within that eternal pop theme: heartbreak. Someone done gone and broke the boys' hearts. Sample song titles – 'The Girl Is Gone', 'It's Too Late To Talk.'

There is bad news. One of the tracks here is, without any hyperbole, the worst thing the band have put their name to. Unless it is a parody of those mawkish sentimental ballads they used for slow dances at teen discos in 1985, the aforementioned 'It's Too Late To Talk' is dire, a weedy little ballad full of clichéd lines (“You were the apple of my eye / Did you take me for a ride?”) and sickly Beach Boys harmonising.

There is good news. The rest of the album - despite my best attempts to dislike it for a lack of invention and lack of novelty, for the sheer chutzpah of being so 'retro' – is very good. The slow build of 'Alice Springs' into an epic chorus of “I don't have nothing if I don't have you” over synths that sound just like Christmas is brilliantly executed, while the sparse pop of 'The Girl Is Gone' is as heartbreaking as its title would suggest. The punning of naming a song about a one night stand after Britain's shortest term monarch, 'Lady Grey' is good enough, without having the fun of a descending keyboard line and booming guitars under the cry of “Will you still love me in the morning?” It's pop at it's finest.

These songs are crafted to perfection – there is no doubting the Mystery Jets know their way round a melodic chord sequence, and are au fait with how to write a track that'll get 'em playlisted on Radio 1. That is not a criticism; even without the old recession / music piracy /blah money blah, what band of Mystery Jets' ilk doesn't want to see their stuff played to as many people as possible? Surely that's the whole point of making a record like Serotonin? They want to make pop music, and that is no bad thing, particularly when it's as well executed as this.

The lyrics aren't great, which fits in with that whole ethos – universal feelings, not abstract metaphors, are what songs like this demand. “I never found you / No matter how hard I tried to”, or “It cuts like a knife”, or "When life gives you lemons / You make lemonade" are fairly effective, but clichéd. Then again, 'Flash A Hungry Smile' features the greatness that is: “Have you heard the birds and bees / Have all got STDs?”

There is another theme, apart from heartbreak – that of drugs. Naughty naughty drugs. 'Serotonin,' despite the way it is enunciated to sound like “Sarah Tonin”, is fairly clearly about E - “I felt like I was floating / But now I'm coming down off you so hard.” It fits into that tradition of great pop songs that sound like they're about a gone girl (please see 'There She Goes'), but are really about the side effects of imbibing chemicals. (This also tallies with the suspicion that I might have once seen a couple of members of the band engaged in an illicit transaction outside a club in Nottingham.) Even the title of 'Dreaming Of Another World' is a slight clue, as well as lines like “I spend my days in a foggy haze.” That those two songs are two of the best on the record, the latter full of spacey synths and grand melodic lines seems to suggest that Mystery Jets are better when they're writing about drugs, rather than women.

I previewed five of these tracks after one listen in November. This time round I've had more time to delve and appreciate. Claiming 'Melt' as 'in the running as a potential single of 2010' may have been premature, but it is still a bit special, a sweet little declaration at the end of a bucket of pills and bedroom moping. Serotonin makes its intentions pretty clear – it is a pop record, it has themes, it knows where it wants to go, it knows what it wants to do. It does those things – it is melodic. That there is nothing inventive or groundbreaking here is disappointing, and the nostalgia for 25 years ago does get a little tiring on a couple of tracks. Thankfully, there's more than enough moments of gleaming pop majesty to make up for that.

Slow as an Eyeball