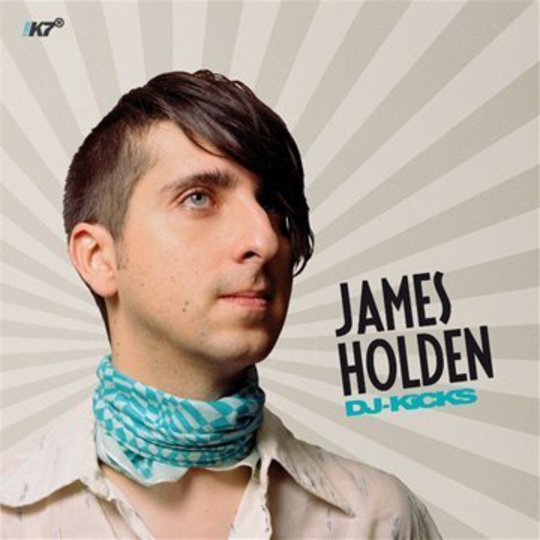 The ever reliable DJ-Kicks series is a small bastion of hope for the compilation album. The abundance of music available online and the ability to drag and drop files into playlists may make the mix CD seem redundant, but there’s still value to be had in a well-constructed set that has been expertly chosen and seamlessly blended together. The esteem in which the series is held shouldn’t be underestimated either. With past sets from Carl Craig, Four Tet and Hot Chip to consider, not to mention an excellent upcoming mix by Kode9, producer, DJ and remixer to the stars James Holden was practically forced to up his game to maintain the impeccable standard of the series.

Holden’s eclectic approach to remixing has earned him jobs with everyone from Madonna and Britney Spears to Mercury Rev and Kieran Hebden, although this set leans heavily towards the latter in both feel and choice of song. This certainly isn’t aimed at the dancefloor - instead, it’s pulled together from a mid-tempo cluster of tracks, some of which bear obvious similarities, others less so. But everything here is glued together impeccably when mastered at Holden’s fingertips, due in part to his notoriously fastidious technique, which includes drawing up a spreadsheet charting the key and tempo of each song.

His position as an electronic uber-nerd is clearly assured, but judging by this compilation, there’s little doubt that Holden has impeccable taste. A large portion of this mix is culled from musicians who, like the mixer himself, don’t feel constrained by the confines of genre. Artists who teeter in a netherworld between styles, such as Black Dice’s Eric Copeland, Hebden with his recently deceased collaborator Steve Reid, and the ever-evolving Piano Magic, all feature. It’s a testament to Holden’s skills that he can make it seem like these songs belong together, blurring the boundaries between them, forcing tracks to feed off their immediate predecessors, and forging symbiotic relationships that make formerly disparate artists seem suddenly co-dependent.

But this is the real skill of a truly talented DJ — to find harmony where none seemed to exist, to force cohesion from discord, to open our eyes and ears to the seamless flow of ideas that ebb and flow through a well constructed set. There’s a tangible beginning, middle and end here, making it feel like an hour-long venture into Holden’s mind rather than a simple assembly of parts. The earlier songs are a slow-build into the mid range pace of the set, with Holden favouring tracks constructed around odd moments of dislocated percussion, such as the ticking clocks of Piano Magic’s ‘Wintersport/Cross-Country’ and the handclaps of Grackle’s perky ‘Disco’.

Holden’s own nine-minute reworking of Mogwai’s ‘The Sun Smells Too Loud’ ushers in the mid section, bearing a white-light kraut-ian ambience that regularly feels like it’s going to be eclipsed and obliterated by the skewed drone that bursts out of the heart of the song. His propensity for misshapen percussion surfaces again on the Hebden/Reid song ‘Departure’, which sounds like underwater gamelan played on knitting needles, before the pace picks up at the close of the set. The acid squelch of Legowelt’s ‘Flight of the Jupiter’ and the similarly minded ‘Gaberdine’ by Walls help bring the set to a euphoric close, which is capped off by the dense noise and piercing skree of ‘Catacomb City’ by Brooklyn’s SS Pyramid Snake.

The spirit of adventure that marked many of the previous ventures in the DJ-Kicks series is firmly intact here. But this isn’t a simple demonstration of the depth of Holden’s record boxes. Instead, there’s a sense of care and understanding at work, a feeling that a great deal of effort has gone into constructing one singular piece from the efforts of others. Holden is capable of spotting missing links and tying them up, but he’s also able to prevent the end result from sounding like a mesh of cacophonous ideas that don’t gel together. Instead, we get a neatly cohesive piece, which ably matches the ambitions of many of its contributors, who push and pull at the seems of music, using it as an exploratory force to confound their listeners’ expectations. Holden has effortlessly matched their collective intent here.