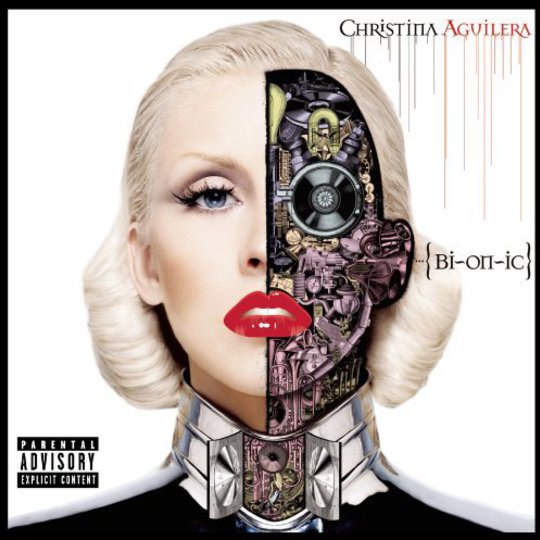 What to do. What to do. What to do. You’re a former Pop Princess, a Mother and Wife; you’ve successfully reinvented yourself twice over. Then a new pretender enters the scene. A Lady whose knack for stylised provocation matches her insane vocal abilities. She’s blonde, ahead of the game and overtly Gaga. Her whole show renders your contribution to Pop Culture obsolete.

Let’s think about the emergence of Lady Gaga for a minute, and how it affects the career of Christina Aguilera. Aguilera has spoken out before the release of Bionic to quash the comparisons, and potential beef between the pair. Distancing herself from the drama by saying there is room for both of them in the industry. The problem for Aguilera is that Gaga is a post-modern Warhol freak, a girl who has knocked together a pop art performance piece out of Cyndi Lauper’s New York weirdness, Madonna’s Eighties fashion quirks and Aguilera’s mix of talent and tastelessness. Aguilera is now beneath Gaga in the eyes of the public; ideally on this record she needed to come out with claws sharpened and take back her trashy tiara.

Christina Aguilera has chosen not to go Back to Basics this time around. She’s dusted off her Xtina persona, and amped it up a notch. Take a look inside the album insert and you will see an image of Christina’s rouge red lips parted by a ball gag, and provocative black and white pics of Aguilera without her panties on – the head of a cartoon cat over her ‘pussy’. In my mind, Christina has got it all wrong, since she comes across in the art work as more like Sasha Grey than Bettie Page. We all commended Justin Timberlake a few years ago for bringing sexy back. I wonder what props Christina Aguilera will get for bringing slutty back (again)?

The first half of the album is penetrating in a Smearmint Rhino employee rubbing against your nervous drunken lap kinda way. This is the soundtrack for strip clubs. The sound of a g-string pinging back as a fiver lighter strokes the firm thighs of a gyrating cosmic dancer. ‘Bionic’ attempts to sound futuristic, but it doesn’t. For Joe and Josephine Public, futuristic mainstream pop sounds like Kelis’ ‘Accapella’, or the Black Eye Peas album The E.N.D. Polow da Don’s production tries too hard, but doesn’t deliver the soundtrack for all the single ladies to wiggle on Friday nights. ‘Not Myself Tonight’ underlines a huge problem for Christina, her apparent identity crisis. Is Xtina the dark side of Christina, the character that represents a freewheeling, risk taking, carefree party girl? Or is this persona the mask a desperate popstar wears when they are struggling to maintain relevance?

‘Woohoo’ features Nicki Minaj, arguably the most overrated female rapper of recent times. The chick is riding high, part of the Young Money stable. But you get the impression that she’s a lot like Eve when she was part of the Ruff Ryders crew, a passenger. Out of all the collaborations on this record, the Minaj one is the most disappointing, especially given the buzz about last year’s Beam Me Up Scotty mixtape.

‘Elastic Love’ has a wonderful electro sub-bass grind to it, and makes up for the poor beginning to the album, Aguilera dramatically simplifying her usual histrionic vocal delivery, which leads to some surprising results. The lyrics are throwaway, but clever like a dunce who has a happy knack of making a lucky guess. ‘Desnudate’ (meaning undress) continues the strip theme, with Aguilera bouncing along Miami Sound Machine circa 2010 beats imploring us to get naked. ‘Glam’ is an interpretation of Madonna’s ‘Vogue’, a pastiche if you will. It’s horribly weak. “Let’s get glam, don’t let the clothes wear you” is the clichéd gibberish Gok Wan left in his Fashion Fix outtakes.

What’s so disappointing is that her last album Back to Basics was such a intriguing departure, a focus back on vocal talent and Aguilera’s classic influences. Bionic is very similar to the huge selling Stripped; however upon that record's release in the early Noughties, Aguilera’s Pop Subversion was daring, and fresh, aided by Scott Storch’s striking production. ‘Prima Donna’ includes all the ‘now' sounds production wise, and crucially Aguilera can exercise her lungs. Yet it never even gets off the ground.

Then Aguilera goes all gushy and gooey, slow jam after slow jam – ‘Sex for Breakfast’ is self explanatory, licking whipped cream from gently touched piano keys. ‘Lift Me Up’, co-written with Linda Perry, has been tagged onto the release, then she gets her husband and kid to contribute a touching skit which segues into the ode to her child ‘All I Need’ co-written with Sia Furler.

‘I Am’ seems to reveal an unguarded Christina, singing about her insecurities. Again working with Sia, the pair seems to have developed a strong song writing partnership. I’d love this to have been the lead off single. Maybe if Aguilera had worked with Sia for the whole of this album and put out nine or ten ballads of this calibre then such an album would have been golden.

Aguilera visits the many facets of her personality on Bionic; the trouble is the raunchy, OTT harlot side sits uneasy next to her role as a caring mother and sensitive lover. This album represents a directionless woman unsure of where she currently stands in the pop hierarchy. This begs the question, should a female artist settle down in the middle of their career? Should they instead follow the workaholic blueprint of Beyonce, and keep churning out music and then think about starting a family at a later date?

Whatever the case, for Christina Aguilera, the x-factor has gone. The daring single minded focus has apparently been lost. In this hard game, when you settle down, you settle for second best.