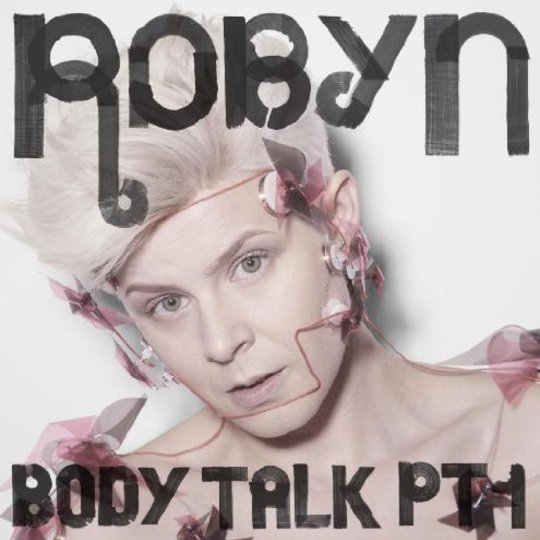 If you wind up liking Body Talk Pt. 1, you’ll be pleased to know that there’s more on its way, which you admittedly might have guessed from the record’s title. Robyn is keen to let you know that she’s doing it this way because she loves this damn job: the eight-song, half-hour duration might sound miserly, but has supposedly come about because the Swedish synth-pop figurehead just couldn’t wait to grace us with the songs she’d finished. To this end, there’ll be two further, similarly slimline, volumes of Body Talk along in the near future.

This is all peachy, and if Robyn reads this I trust she won’t consider me more of a patronising shitbag than I actually am if I applaud her for her efforts to grasp control of her career and generally do things her way. However, it’s hard not to see this release as a tacit admission that her brief time at the peak of the (British) charts is almost certainly not going to be revisited, and that the bricks of marketing department money spent by Island, from 2005 onwards, on trying to make Robyn the global empress of conceptual electropop have not yielded full results. As a rule, major pop stars do not release mini-albums, let alone three; people are unsure what to do with them exactly, how to price them, if the opening track is the one that’s intended for radio play. (On Body Talk Pt. 1 it’s called ‘Don’t Fucking Tell Me What To Do’ and its lyrics comprise Robyn intoning a list of vices and aggravations – her drinking, her heart, the record label – which she claims are “killing” her, so that answers that.)

The gaudy elephant in the room here is Lady Gaga, who released the similarly miniature The Fame Monster last year. The irony is that she could do this thanks to the monstrous fame she’d already accrued via a post-Madonna aesthetic and an abstraction of gay club music – the legit superstar status that Robyn, doing much the same thing, couldn’t quite scale. Considering Robyn’s rollercoaster career path to date – Nineties Scando-teenpop success at the songsmith hands of Max Martin, followed by a mid-Noughties split from her label to pursue autonomy, electronics and intermittent hits – proclamations that only the music matters, not the units shifted, are liable to ring a little hollow. Nevertheless, there’s a lot to like about Body Talk Pt. 1, so let’s run with it anyway.

Perhaps unsurprisingly, there are no songs on here with the widescreen brashness apparent on Robyn’s last, self-titled album (from 2005, 2007 or 2008 depending on where you live) – no ‘Who’s That Girl’ or ‘With Every Heartbeat’, the UK number one. Allegedly a more personal album than her previous releases, Robyn tends to leaven her emotions with, if not jokes exactly, then a sort of arch humour. ‘Fembot’’s chorus scolds, through a vocoder, “I’ve got some news for you / Fembots have feelings too!” over a pop-dusted version of fidget house – arranged by Klas Ählund, who wrote much of Robyn and is on board for almost all of this record. Only ‘Dancing On My Own’ and ‘None Of Dem’ are free of his fingerprints, but Patrik Berger (a Swede-pop backroom boy; regrettably no relation to the former Liverpool player) comes good on the first of these with some whomping electro that Gigolo might have released about eight years ago, which is perfectly fine. The latter is a border-hopping collab with Röyksopp, a couple of months upfront of the Norse duo’s new album; they deliver a blippy, vaguely sanitised reading of minimal techno while Robyn has fun in the role of brattish toffee-nose: “I’m so bored in this town ... none of them get my stance”.

The other outside producer here is Diplo, who handles the frankly peculiar ‘Dancehall Queen’ – wherein Robyn is transplanted from her litter-free Scandinavian homestead to a Jamaica where she can saunter onto the dancefloor, wind up her waist, “shout out on the mic” and repeat until she is handed her titular status by a cabal of gawping regulars. It’s evidently laced with irony, and is possibly the most fun tune on here, but is still kind of a modern equivalent of 10cc’s ‘Dreadlock Holiday’. Not that this is likely to trouble Diplo, chief brains behind cartoon dancehall creation Major Lazer, whose Twitter account features attempts at patois so crass as to recall a feature from the 1972 News Of The World Sports Annual where Eusebio, via a ghostwriter, presents tips on how to replicate his silky skills. (It was passed down to me when I was a kid, OK?)

It might be unintentional, but the transition from ‘Dancehall Queen’ to ‘None Of Dem’ to the record’s final two songs, ‘Hang With Me’ and ‘Jag Vet En Dejlig Rosa’ appears pointed. Robyn improbably out-boogies a room full of Jamaicans, then gets fed up of how lame everyone else in the club is, then sacks it off entirely for a brace of songs without a beat between them. The latter, in fact, is a traditional Swedish folk number performed here with almost no instrumentation, showcasing Robyn’s voice in a manner her tartrazine-hyper productions rarely allow. Maybe there’ll be a surfeit of it on the second and third Body Talks. It would be a shame to abandon her essence, but at this point she could probably cast aside chart-topping thoughts and go for it.