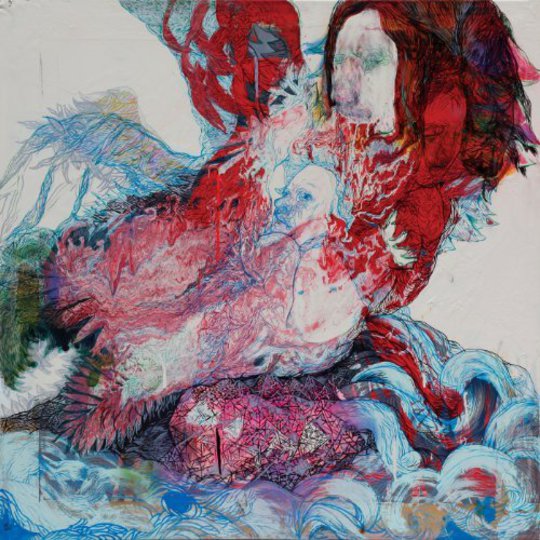 Occasionally a band will rend open a prodigious black hole, an all-consuming void that sucks in their sound and spits it out with such righteous fury that it’s in danger of making the rest of their music redundant. It takes some nerve to push an act of such grand folly out into the world, especially when it tugs so many ideas to logical extremes, implicitly drawing a line under them in the process. Fortunately, former Coachwhips frontman John Dwyer appears to have been born into one of the Faraday cages built by scientist Michael Faraday in the 1800s to make machinery impervious to electromagnetic radiation. In short, he’s built Thee Oh Sees into a Teflon coated vessel that spews out countless records at a furious clip and plays live with such intensity that it feels like the band members have noticed the Doomsday Clock is about to strike midnight.

In the event of nuclear Armageddon, there wouldn’t be time to get through ‘Warm Slime’, the thirteen-and-a-half minute title track of this, the umpteenth album in Thee Oh Sees’ canon. Clearly, someone didn’t inform Dwyer of the notion of the four-minute warning, which would notify the human race of its impending meltdown. Thee Oh Sees are banking on having a little more time to soundtrack the end of the world, and while there are other tracks here—notably the Monks-like ‘Everything Went Black’ and the ‘Surfin’ Bird’ pastiche ‘Castiatic Tackle’ — you just don’t need them in your life as much as you need ‘Warm Slime’.

0:04 It begins, as everything should, with a whistle and a ”one-two-three-four” count. Any established fans taking baby steps toward ‘Warm Slime’ will find themselves on familiar territory for the first couple of minutes, with Dwyer and Petey Dammit exchanging scuffed guitar lines and working comfortably within the garage punk idiom they’ve established as Thee Oh Sees’ modus operandi. Dwyer may have forged a reputation as an insanely prolific underground figurehead of sorts, but he can also sniff out a pop hook at 40 paces —the warmly cooed ”ooh ooh-ooh-ooh” vocal that marks this first part of ‘Warm Slime’ is the work of someone who innately understands, just as everyone from Adam Ant to Stereolab have done in the past, that when it comes to conveying emotion in song, sometimes regular syntax just doesn’t get the job done.

2:20 Thee Oh Sees really get why the Monks are regularly cited as fundamental forebears to krautrock and punk. At this stage in the song the guitar sound remains shaved down to a raw, elemental welt, but with a diversion into a bouncy bass oriented locked groove that allows Brigid Dawson space to repeatedly intone a single vocal line over the top. This is Dwyer and his band putting a lit rocket under their sound and standing back to see where it takes them, with the elasticised bass forcing them through slow and fast passages and then ultimately funneling down a hole into complete silence.

4:46 A pure vocal break shorn of all instrumentation, aside from drummer Mike Shoun keeping time. It’s much like something you’d witness at an old soul revue, at that part in the show where the singer hushes the players and a simple vocal chant begins at the stage and ripples through the audience. Except, in Thee Oh Sees’ case, it’s more like a death rattle, an eerie, reedy, wisp of a hymn, pulling on a familiar trope but making it insular instead of spreading it wide. It’s the coldest invitation to sing along that you’ll receive all year. But by drawing on an old soul tradition, it demonstrates for the nth time how close that genre is to punk, how both forms draw on a pool of righteous emotion, where the notion of not working up a sweat, of not turning over every fiber of your being to each performance, is anathema.

5:40 The bass throb quietly creeps back in, forcing the other instrumentation to pile on top of it. The anti-guitar solo that ebbs and flows in the mix at this point acts as one of the most pinpoint accurate commentaries on redundant rock & roll posturing you’ll hear this year. At times the guitar sound veers close to Einsturzende Neubauten drilling a hole into the stage at the ICA in 1984; at others it drops out of the mix altogether, only to return in a Suicide-like squall of piercing noise pulsing away at the heart of the song, ably matched by Dwyer’s Alan Vega yelps. Much like Suicide, this is the sound of Thee Oh Sees returning to the roots of rock & roll and punching it in the gut.

8:43 The resurfacing of Dawson’s vocals act as a reducer, condensing the noise of ‘Warm Slime’ down to a hush again, causing the circuitous bass riff to lightly buffer up against them. There’s a machine-like texture at work here, almost as though the band are setting the rhythm to a piece of industrial equipment. The vocals eventually devolve into babbling speaking-in-tongues incoherence, much like a child finding joy in duplicating words and eventually slipping into an odd un-language that the brain triggers after enforced periods of repetition. It’s the vocal equivalent of the little counter melodies that surface in extremely repetitive music when listened to over a sustained period, but can just as easily not be there during another play, like a musical trick of the light.

11:45 The quiet crawl out of ‘Warm Slime’, with the bass still acting as a pivot around which Thee Oh Sees gently stop pressing down so hard on our synapses. It’s reminiscent of a live performance by the Cramps, with Lux Interior lost somewhere in the audience and the band members gamely playing along as they stretch out a riff and peer into the crowd to look for their errant singer. Dwyer’s unlikely to be seen performing in a jockstrap and high heels anytime soon, but he’s managed to tap into the same primal core of rock & roll that the Cramps so joyously suckled on, and much like that band, he’s taken a decaying art form and pummeled a fresh new twist out of it. Once again: there are six more songs on this album. Six songs that really aren’t bad at all. But once your needle has dropped to the end of side one, it’s only going back to the beginning again.