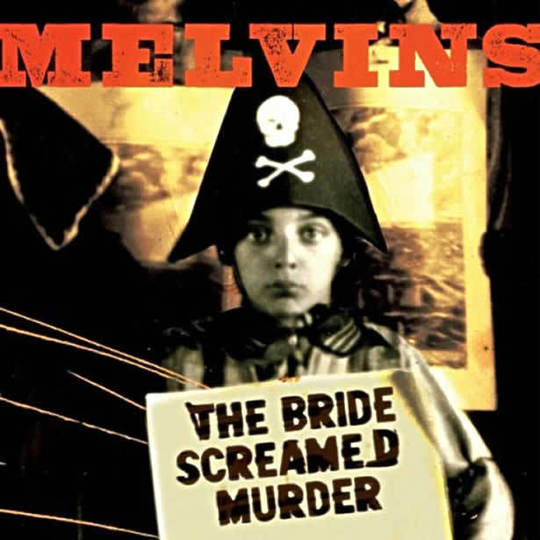 Some people have this idea that the Melvins hate their audience and/or have contempt for them. I used to have this idea myself, in fact, and distinctly recall expressing it in a review of their 2001 album Colossus Of Destiny (for those unfamiliar, this is a live recording of the band doing uninterrupted drone noise for an hour, ending in a pretty rad rendition of their classic jam 'Eye Flys'). With the benefit of hindsight, though, I'm not at all sure it's accurate. It's true that the band – certainly the two original members, Buzz Osborne and Dale Crover; recent additions Jared Warren and Coady Willis of Big Business are younger and chirpier – can be pretty ornery in interviews and in their stone-faced onstage demeanour. Still, if they sometimes have the sheer unfettered gall to overlook their own ability to construct thumping, earworm-y heavy rock tunes in favour of drifting outwards on a pillow of ear-testing odditude, it's probably more to do with not wanting to be manacled down to one style, rather than because they want to piss thousands of people off.

The Melvins' reputation for following up albums made of commonly understandable song structures and catchy riffs with ones that feature little or none of such fripperies is pretty much deserved. It isn't precisely what they've done on The Bride Screamed Murder, their fifteenth studio album (disclaimer for the nitpick posse: not counting mini-albums, collaborations or comps here), but this album is palpably stepping away from the slow, near-anthemic rumblers that made up the bulk of (A) Senile Animal and Nude With Boots, their previous pair. Its mix of driving twelve-cylinder rock and drawn-out eccentrica stands it alongside other Melvins catalogue notables – 1997's post-major label sigh of relief Honky, and 2002's Hostile Ambient Takeover – but sometimes, it just doesn't sounds like the Melvins at all. And the Melvins have sounded like lots of things in their time.

'PG X 3', the last of the album's nine tracks, is a quasi-gospel a capella for a bit over two minutes and sounds like something that might have appeared on an anti-apartheid benefit LP in 1985. This can legitimately be described as an unexpected string to the band's bow, even if it does presently turn into a thickly atmospheric guitar instrumental. On one occasion, they do sound like the Melvins, more or less, but aren't actually playing a Melvins song – they're covering 'My Generation', albeit at about a third of the pace of The Who and with a different arrangement. After a few minutes they stop treating it as a 'cover' in any meaningful way and bong out down the ambient rabbithole. It's actually done artfully and a little hypnotically, but you just know that when they crank it live it's at least partly done to get the crowd to stop moshing to their unmoshable songs for a minute (why do people feel the need to react to the Melvins like this?).

The practice of bolting on a largely or wholly unrelated piece of sound to the end of tracks is so prevalent on The Bride Screamed Murder to almost be a theme. It arrives on 'Electric Flower' and 'Hospital Up', both solid-to-super mid-album cuts that largely go straight for the jugular, and 'Pig House', a winningly jarring collection of sharp angles which closes with solemn chanting and a singular struck triangle. Hell, on the album's opening track 'The Water Glass' we get textbook Melvins – Osborne laying a carpet of golden riff thread, Dale Crover and Coady Willis slaying on drums. From about one minute 25 seconds onwards, however, something completely different (to coin a phrase): a drums and voice-only call-and-response soundtrack for the band's imaginary army of shock-hair-wigged alt-metal dudes to pound the concrete to as they marched to Florida to annex it. 'Civil New War God', which follows it, swings with a relatively straight bat – albeit abetted by some killer spooky organ which sounds it's been lifted from a thirty-five-year-old horror soundtrack, and which is retained for 'I'll Finish You Off' (hur hur).

The Bride Screamed Murder isn’t the best Melvins album ever, but it is rarely less than arresting as a listening experience. Moreover, they sound like they’re having a blast, unconstrained by draconian label expectations. (That said, another great thing about these guys is that they sounded like they were having a blast, even when they were signed to Atlantic circa grunge mania and constrained by just that.) Oh, and if you were wondering why I wrote about the tracks on this album in roughly reverse order: why, that’s a tribute to the Melvins’ Ipecac Records-era practice of putting the album cover at the back of the CD case and the tracklisting at the front. Now that almost certainly is just done to be annoying.