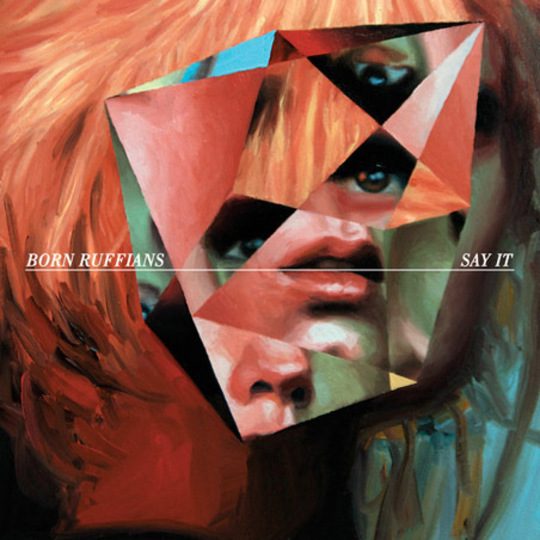 There has always been a seasonal quality to music – the way post rock is wrong on a summer's day, or how certain Pavement songs sound wrong trenching round in the snow. And Born Ruffians, both on their new record Say It - and previous Red, Yellow & Blue - suit the summer infinitely more than the months past September. Something indefinable about the guitars, probably.

Whatever it is, Born Ruffian's second is certainly less immediate than their impressive debut, the melodies taking several listens to reveal their inner workings, perhaps aided by the relative sparseness of the sound. There is nothing as joyous, or as dense as, say, 'Hummingbird' or 'Barnacle Goose.' The lyrics are strong, but not spectacular. Workmanlike would be the word, if it wasn't so dismissive. Their words do really work, and the way they do it is by playing off the music brilliantly; lines like “I've got a funny feeling / I think she might be cheating” are made greater by their interaction with the band's by now trademark lolloping bassline. Or the punning of “You're not a member of the human race / But you still run it anyway” on 'Retard Canard.' Occasionally wilfully mishearing the words ruins things (I'm thinking here of 'Sole Brother)' - “Sometimes I wish that I was a sole brother / An only child.” That homophone may be intentional, but it plays havoc, making you think of soul brothers, and Born Ruffians desire to do a reverse Jackson, rather than what is actually a (now ruined) sad evocation of not wanting a sibling anymore.

Put the album into context and the move towards a sparser sound makes more sense – the album title emerges from concerns on communication, which, whilst primarily relationship focused, also (apparently) reference issues within the group. If we want to get all Brian Sewell about it, the artwork even features a fractured image of the band. You'd think this was a complicated recording process, then, full of debates, but the thing was put to bed in two weeks. The way the record flows easily throughout gives a natural feel, and suggests that the fractured cover art might be more artistic than reflective of band dynamics.

It's not like the music is all that smooth though, all chopped and diced guitars emphasising the spaces between the notes and the instruments. Undoubted highlight of the whole thing is 'Nova Leigh' does all this, as well as showing that Born Ruffians haven't lost their way round a chorus, its lonesome country ballad “oooo-hooos”, lovelorn and lost.

As well as a clear 'best song', there is also the all too easily categorised 'epic song.' 'The Ballad Of Moose Bruce' ramps up through its drums, building and feeling a lot longer than its sub four minute length. The problem is, it all seems too obvious, too 'Album Writing 101.' It even has a weak-ish closer in 'At Home Now', which doesn't do too much, just lets Say It drift away quietly, slowly, with vocals almost devoid of melody.

The album almost falls into the trap of the debut, where four or five of the songs were much better than the rest. Almost. Whilst a few songs – 'Nova Leigh', 'Oh Man', 'What To Say' – stand above, the rest is much, much closer in quality. It would be hard to remove any tracks without ruining the whole piece – Say It is much more cohesive than its predecessor. Its lack of immediacy also works in its favour, meaning it rewards any perseverance with blooms of melody and clever little interweaved guitar and bass lines. By focusing inwards, Born Ruffians have done that whole 'maturing' thing that us reviewers like to talk about, and created a much improved piece of art.