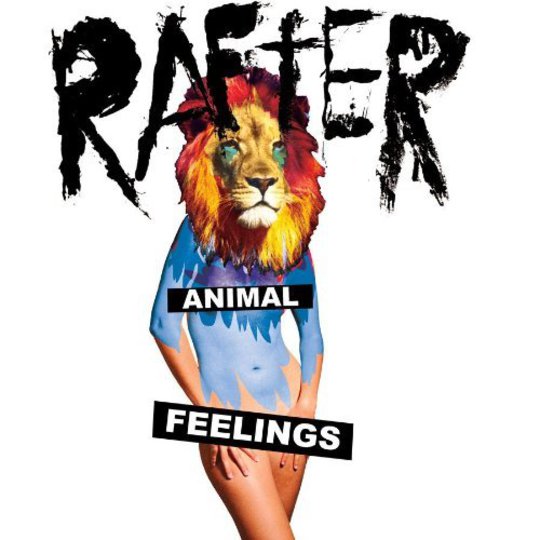 Rafter is definitely not a pop star. He’s a producer and engineer associated with Asthmatic Kitty, not an ex-mouseketeer associated with Jive. His CV includes stints working with cred-worthy bands like Hot Snakes, Sufjan Stevens, Castanets, Rapture and others. He is presumably one of us, not one of them. Despite that, he’s made an album, Animal Feelings, which hews as close to the modern radio-pop aesthetic as anything I’ve heard from an independent label. Think crisp production, simplistic lyrics about “lurrrve”, slick percussion and not a guitar in sight. Essentially this is a genre exercise; Rafter has limited himself to working within the constraints of the modern pop/R&B lexicon; considering his context, his take on the genre is surprisingly straightforward and classicist.

It’s an interesting experiment, and I must say I was intrigued to see how it would work out. As a person who (along with many readers of this site, I would wager) is often thrilled by modern pop but can’t bear to have too much of it in his music collection lest he get caught, the idea of independent pop made by a man un-suckled at the Cowell teat strikes a chord. The guy cites R Kelly as a major influence; I cite R Kelly as a major influence. I wanted this to work. So how does Rafter’s independent pop compare to the real thing?

The answer is: Not too well. The main issue here is the songwriting itself. There’s very little on this record for the songs to hide behind. The instrumentation is crisp but unobtrusive; the vocals are way up front and undistorted (unless you count a little AutoTune). While there are eclectic elements in these songs, the sound is nothing shocking by contemporary standards. In sharp contrast to indie-pop groups who might get away with masking weaker songs behind a layer of scuzz or bleeps, this entire record seems engineered to place the songs upfront. Unfortunately, in this harsh scrutiny, they come up lacking. There are some solid hooks here (‘Fruit’ is a highlight) and at times this record can be uplifting, buoyant, and fun However, a lot more of the time it’s middling, and parts of it are downright odious.

The lyrics reflect the genre constraints Rafter is working in – small words simplistic subject matter and hyper-literal content. However, rather than the enlightened, universal minimalism and he’s clearly shooting for, the lyrics instead strike one as lazy and half-baked. Choruses include the phrases “You’re my girl, and I love my girl” and “Love makes you happy when it’s not making you sad.” This is lyricism via greeting-card or fortune-cookie. I was hoping for a bit more from this record in terms of content; Rafter doesn’t have to play to the crowd here; he has no corporate bosses to appease or focus groups to answer to. Nonetheless, the lyrical content here is remarkably lacking in depth.

The most disconcerting element here is the sense of primitivistic pastiche running through the record. Rafter clearly owes a debt to modern R&B, and the record shows an attempt to capture some of the spontaneous libido and energy of an R Kelly, T Pain or Dream. Unfortunately, these elements come across as disjointed and problematic (the most noticeable is his decision to say “Motherfucker” at completely inappropriate times—a move he may have cribbed from this guy. While cultural appropriation in arguably the basis of all pop music, in Rafter’s hands it's less polite homage or deft re-contextualization, and more 'guy awkwardly break-dancing at a middle school dance', or somebody’s mom saying 'off the hook'. As this hypothetical 'edgy' mom would say: Not a good look.

By following such an unadorned, straightforward pop template on this album, Rafter’s given himself a difficult task. Pop lives or dies primarily on the quality of the songs, and in comparison to the commercial pop he’s emulating, these songs come up short. If anything this record demonstrates that, in this case anyway, the lone indie guy still hasn’t supplanted the pop music machine. The Lou Perlmans of the world can sleep soundly, at least for now.