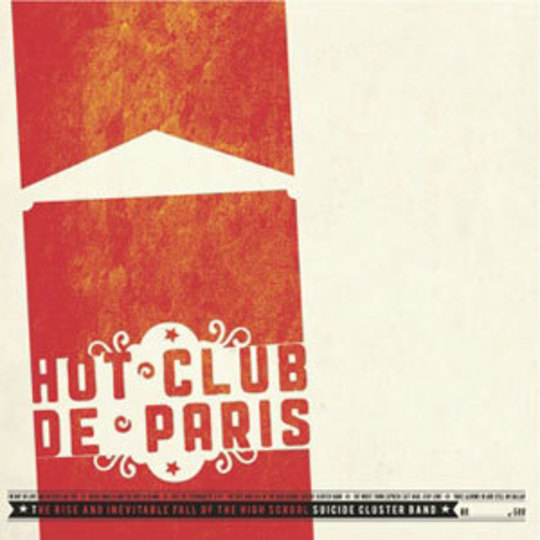 When Hot Club De Paris first arrived burst onto the great indie scene, way back in 2004, we had an abundance of jangly, sometimes angular, guitar bands to choose form. They were everywhere. It was like there was a pandemic of thin guitar sounds and choppy chords. What made Hot Club stand out from the masses was their sense of humour - something that most bands lack - their barbershop inspired harmonies and their math rock sensibilities – not many bands release a debut single that’s in 7/8 time. Subsequent outings have seen Hot Club eschew the almost novelty element of their early sound - those barbershop harmonies - in favour of pursuing their math rock sensibilities. With The Rise And Inevitable Fall Of The High School Suicide Cluster Band, Hot Club have gone in the opposite direction, and taken one step towards the mainstream and a step away from their more obscure influences.

At first glance, it’s obvious that Hot Club’s sense of humour and fondness for Tim Kinsella-style word play remains intact. ‘Biggie Smalls and The Ghetto Slams’, ‘Three Albums In and Still No Ballad’, ‘Free The Pterodactyl 3’ – those cheeky Scousers just can’t help themselves. Lyrically, Hot Club are, as ever, concerned with either singing about girls or bands or girls and bands. ‘Biggie Smalls…’ is a tale of punk rock and friendship, mourning the loss of a “great, great band called Biggie Smalls and The Ghetto Slams” whose members all eventually succumb to social obligation, leaving just a one-man band called “ODB and The Last Stands”. 'The Rise and Fall of The High School Suicide Cluster Band' tells the story of a fictional school disco, and addresses the issue that there’s always someone who could act as a threat to your chances, someone bigger, someone better. Within the context of the school disco, it’s the threat of someone literally bigger, the older kids, the bigger but not necessarily better kids - “the last one was a slow one, slow like the brains of the morons, who waiting at the fences to try it on with they underage girlfriends”, something which I’m sure everyone can remember form their school days.

You Should Know By Now