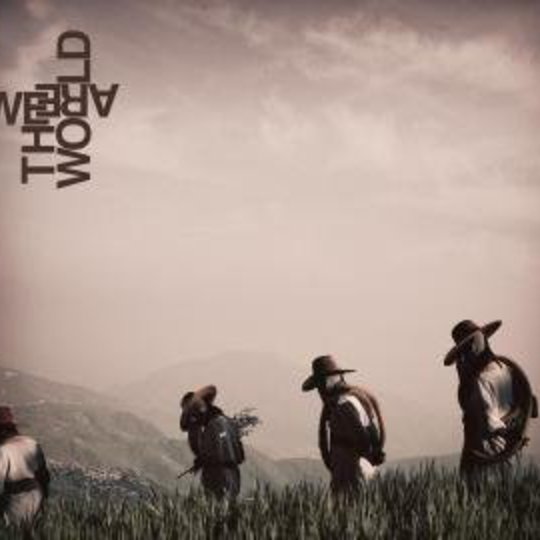 Given that they are a relatively unknown quantity, if you have heard of We Are the World it's probable that you've heard of them for one of two reasons. Firstly, you might think you've heard of them for their mushily sentimental charity records for African famine and, more recently Haitian earthquake victims. If so, sorry you've got wrong We Are The World, no Dan Akroyd or Lil' Wayne here I'm afraid. No, depending on where you get your musical news fix you may know that this We Are the World have enjoyed the patronage of such disparate souls as High Places, Lady Gaga and Dennis Hopper! "I feel that referring to them as a band is a slight and calling them artists fails to credit their powerful pop", proclaimed the latter.

One interesting thing to note is that all these celebrity endorsements have been more concerned with WATW's live performances. I dare say they're an intriguing live prospect'n'all considering the fact that their membership comprises a film composer, a choreographer, a designer and (sounding like something out of Twin Peaks) a CIA-agent-come-burlesque dancer.

On Clay Stones however, WATW fall short of the originality you would expect from such a unique ensemble. Many less famed individuals have noted the similarities between WATW and The Knife (and by extension Fever Ray) and there's just no denying the similarities. It isn't like WATW have straight-up ripped off any of the Dreijer sibling's songs, but sonically and atmospherically they are very close relations. The precision of the punchy (almost abusive) beats and the foreboding dystopian synth sounds would be enough to engender these comparisons, but WATW magnify this problem by heavy voice manipulation to the vocals of frontwoman Megan Gold, undoubtedly Karin Dreijer's signature.

The androgynous effect of this pitch-shifting on tracks like 'Foot Follows Foot' and 'Not In Death' isn't nearly so bracing due to its familiarity; even in the context of the album alone, the effect is overused. It's a shame we don't get to hear more of Gold's natural voice, because on the title track her untreated vocals prove her capable of a fine snarling pop performance. It's easy to see what inspired Lady Gaga to tweet in admiration. Gold's natural voice is perfectly attuned to the rhythmic delivery demanded by the club ready pounding beats and short repetitive bass figures. The organic sounding snare rolls give the steady thud of the synthetic beats some welcome textural variety also. There are other pleasing moments throughout the album; the warm glow of synth pads on 'Fight Song' recall forgotten Frenchman Colder, but with a fantastic blend of chiming bells and squiggly synth arpeggios. The way the decaying synths and car engine-like sounds go over all the lines whilst being buffeted by the darting hooks of a high-tempo synth pulse on 'Clover and Dirt' is a little more memorable, as are the hints of shoegaze noise and glam-rock stomp which try to force their way to the fore on 'Goya Monster'. In fact the album almost ends on a high with the cowbell clatter and wall-rattling low-end of instrumental track 'Sweet Things Are So Hard' and the pseudo-dub shimmer of closing track 'Lord Have Ass'.

Ultimately, however you just can't escape the disappointing degree familiarity in TATW's work. What might be forgivable on a few songs is not so on an album which, even without The Knife comparisons, is an exhaustingly gloomy and relentlessly forceful album to which to listen. More derivative artists have made up for a lack of originality through sheer force of personality or by just being good enough at what they do. Unfortunately, perhaps due to the very nature of the music, personality is in short supply and it too often feels like TATW are substituting atmosphere for melody and impenetrability for ideas.