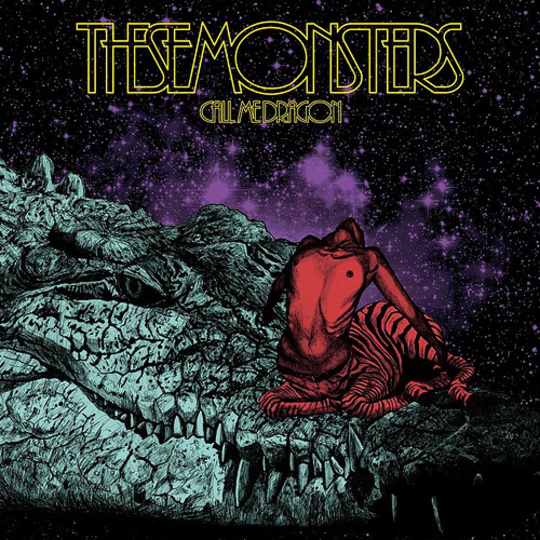 Towards the end of last year, I had the pleasure of attending the fourth annual Brainwash Festival in Leeds. It was awash with the kind of alternative, underground scene that is so rarely found in, say, my newly adopted home of Londinium. Maybe it does exist, but you’d be hard pushed to find anything with such a fervent following as some of Leeds’ local purveyors of noise.

To pick a highlight was a difficult task. Of course Pulled Apart By Hourses played one of the most outstanding homecoming shows I’ve seen. Worriedaboutsatan swamped the Royal Park Cellars with their electronic nuance. But one instrumental highlight of choice was These Monsters; purveyors of stoner-led-instrumental-jazz-rock-ness. Finding them in a darkened student union bar was, albeit, quite a surreal scenario, but the sonic assault that they brought with them filled the already dark hue of the room that with an extra depth, and their following certainly seemed justifiable with that one set alone.

So what ‘Call Me Dragon’ should do is imbibe me with that same feeling. After all, that’s what an album should do, surely? Especially after being so taken aback with delight with the live setting. And with that in mind, there’s success; it’s a damn fine job in certifying that same feeling on record. The eponymous opening track blitzes in with a rolling riff that could play along with heavyweights like Pelican and Isis, meshing it with an accessible post-hardcore twinge, throwing in the indecipherable but undeniably passionate reverberated screams.

But, what becomes pretty clear within the first few listens of ‘Call Me Dragon’ is just how effective this sonic template is. Because in truth, it’s hammered throughout, but retains its shape of originality with an enviable ease. It’d be difficult to find any great meanders from the sonic pummeling they dole out, but in truth, there’s no need. Of course, it could be tiring if it’s not your cup of tea. But if what you have read so far, even in its slight capacity, is in any way in line with your musical ethos or taste, then you won’t find a lot to dislike.

It would, of course, be perfunctory and downright lazy to suggest that such a sentence of mere descriptors does some sense of justice in its encapsulation. It just doesn’t. ‘Who Is This Tall, Sick Man?’ opens up with a Will Haven style dropped riff, before the ever present saxophone and lead guitar intertwine to launch a new, soaring space-rock flight. Where you could once imagine Sweep The Leg Johnny’s wind instrumentals battling over the shred of noisy guitas, These Monsters manage to allow the two to waltz together, hand in hand in their own method of aural assault. This (admittedly not so new) technique is testament to the structure of the melodic side of the band. It’s only emphasized further on penultimate track, ‘Space Ritual’, where their mid-tempo formula is perfected to devastating effect. It segues from wrenching guitar licks into a beautifully reverberated smooth jazz section, before smashing that relative calm into oblivion with metallic thrusts of juxtaposed monotony. It’s jarring, uncomfortable while remaining the antithesis of that the whole time, becoming an entity of unmatchable interest.

While there’s no doubt that you would have heard something just like ‘Call Me Dragon’ before, what makes it stand out is its passion, its manipulation of homage and, more than anything, its ‘chutzpah’. These Monsters deliver where not many artists of this ilk can, and the fire they breath is sure to burn a beautifully sordid image into your musical landscape.