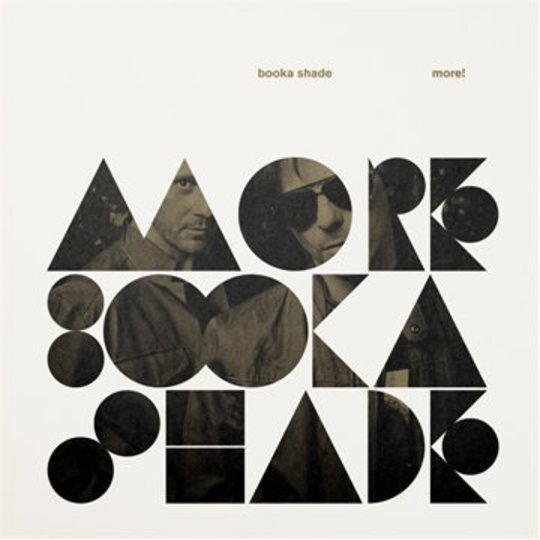 In a recent interview, Arno Kammermeier stated that the reason for naming Booka Shade’s fifth full length release More! was because he and Merziger decided 'we need more club beats, and we need more emotion, and we need more melodies and more strength', and named the album over this desire for more, more, more. Desire and ambition are two of the things which have elevated this German duo to the forefront of their field, releasing two of the best electronic albums of the last decade as well as setting up one of electronic music’s most groundbreaking and prolific labels, Get Physical. This move to do more and outdo themselves has thus far served Kammermeier and Merziger well. However with this their fifth release they seem to have lost something along the way. That is not to say this is a bad album - far from it - but rather that their search for more emotion has somehow left them with less.

This trend is not entirely consistent throughout the album: ‘Regenerate’ and ‘Teenage Spaceman’ display Booka Shade at their best, the former being a euphoric dancefloor track and the latter a return to the epic, emotional electrohouse upon which they built their name. ‘Regenerate’, indisputably the best track on the album, mixes a dubby-reggae beat with ethereal Scandinavian electro vocals and builds slowly before exploding in a shower of colour and light in an almost Holden-esque way. It is definitely a 5 a.m. club track, evocative of sweaty ravers at sun rise. However on tunes like ‘Divine’ they ruin the hard work that they had put in previously. Whereas the actual music is not that bad, with a 4/4 beat and bouncy rolling bassline, the vocals are nonsensical, irritating and completely unnecessary. When they begin, one could almost, just about, forgive the almost unintelligible ramblings, however when the very German voice utters, “of course I’m talking about the guy I know best, the most divine, ridiculous, myself… One, two, three, time is passing by, three, four, five, the truth a lie!”, in particular the inflection on “lie!”, it takes all of one’s mental reserves not to put one’s fist through the speaker.

Over the middle of the album the desire for more club beats is evident, and while tracks like ‘Scaramanga’ and ‘L.A.tely’ possess that Booka Shade touch, namely dance music with an emotional edge, the non-descript and verging on boring house basslines serve to render the tracks as pleasant filler, something to whack on at an after-party when things are winding down.

‘Bad Love’, where they have collaborated with singer Chelonis, shows them at their most cheesy, with a tinkling and wistful little melody that interplays with Chelonis’ disco-y vocals and sees More! wake itself from its mid-album reverie and move towards the dancefloor once more. ‘No Difference’ is essentially a teaser: lasting only 2:21 it builds slowly and sounds like it will turn into one of the best dancefloor tracks of 2010 only to peter out before it gets started. Lacking in percussion and beats entirely, Kammermeier has stated they intentionally left it bare, allowing the possibility of building upon it at a future date and turning it into the club monster that it so obviously wants to become. He has described it as being like a movie soundtrack, harking back to the days when the duo would watch DVDs and make music. Nevertheless, the future reworking of ‘No Difference’ is without doubt something to keep an ear out for.

More! is an album of highs and lows and the plateaus that lie between. From ‘Regenerate’, which is an early contestant for the best dance track of the summer (and which can be downloaded for free off of Booka Shade’s website in return for an email address), ‘Teenage Spaceman’, and the gentle and beautiful electrohouse closer ‘This Is Not Time’, which will no doubt conquer the comedowns that follow in the wake of ‘Regenerate’. Each song definitely has Booka Shade’s stamp on it, and while the attempt to move to more emotional and clubby soundscapes has paid dividends on some tracks, the poor and average tracks render the overall effort incomplete. In short, perhaps a move away from the album format would have made more sense, trimming the fat and leaving the best. More! as an EP would have packed more punch and avoided the pitfalls of consistency which plague albums of every genre. Nevertheless, it is a good album, and perhaps the only tinge of disappointment is the knowledge that they could have done better.