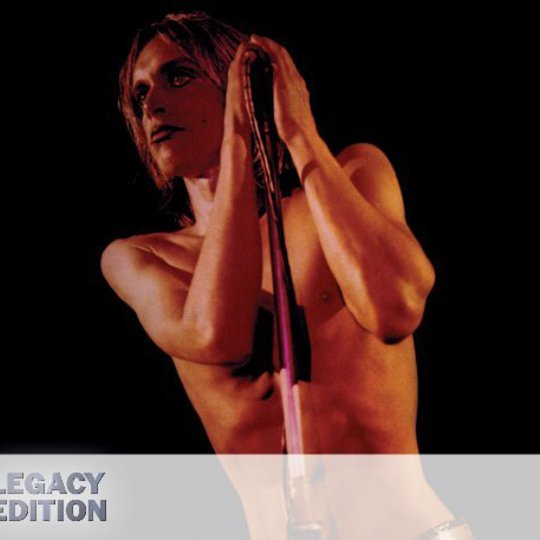 Legacy isn’t something that comes overnight. For all Iggy Pop’s rhetoric surrounding his latest reunion with The Stooges, the fact remains that whatever he might have thought of Raw Power when it finally emerged, spitting blood and teeth, in 1973, he could have had no idea exactly how long the legacy of what has become known as one of the finest rock records ever released would last.

And in that sense, I’m done reviewing the ‘legacy edition’ of Raw Power already. The record speaks, or rather howls, for itself, and the addition of a thousand words to the reams of prose dissecting, fawning and investigating this most feral of albums seems almost pointless. Bluntly, if you consider yourself in any way interested in rock music and don’t already own this album, you’re doing yourself a rather large disservice.

Because if you don’t already own this album, you haven’t heard the way James Williamson’s guitar lurches out of the original mix of ‘Search and Destroy’, clawing at your ankles, exactly in tune with Iggy’s threatening catcalls. “I’m a street walkin’ cheetah with a heart full of napalm” would sound borderline ridiculous if it didn’t feel like it was being cooed by a man who genuinely believes it. And you probably haven’t experienced the paranoia seeping out of ‘Gimme Danger’, a psychotic trip into psychedelia if there ever was one, Iggy’s terrifyingly unhinged personality never sounding more seductive. “There’s nothing left alive, just a pair of glassy eyes” he cooes over one of the greatest hooks ever written, concealed beneath a veil of guitar squall and that shaking, sweating beat. And you definitely haven’t felt the voltage on your stereo surge as the title track kicks into gear following an intro that appears to be composed of a man throwing up. You haven’t felt the entire album catch fire as Williamson hijacks ‘Death Trip’ and takes it careering down an unmarked dirt track, before the whole station wagon flips over in a burst of flame, scree, shredded feedback and howling.

All that remains, remastered, but essentially unchanged, as this Legacy Edition is a faithful one: the original, much bemoaned, but undoubtedly superior Bowie version is retained over Iggy’s 1996 reworking. And that’s important: Raw Power was ugly, still is ugly and shall remain ugly for years to come. It wears its flaws and scars like a badge of honour, which is why it’s not only better than Fun House, but also why it’s better than Kick Out The Jams, and even why it’s still better than almost every ‘rock’ record released year on year. Concisely, it’s a perfect record.

And as much as it’s always a pleasure to listen to Raw Power a few times through, for those shelling out for this Legacy Edition, or indeed the three disc Deluxe package, it’s worth asking how much extra bang’s been added in return for those extra bucks. Whilst the disc of rarities adds little that serious fans won’t have already heard, it’s worth noting for a strange prototype version of 'Penetration' which sees Iggy howling “I’m hungryyyyy” instead of “penee-traaaaaa-shun”, although the rest of lyrics seem farcical enough to confirm that the released version captured the suggestive swagger far better than food metaphors ever could. Most fans will already have been exposed to the jarring 1-2 sucker punch of ‘I Got A Right’ and 'Gimme Danger’s nauseatingly twisted cousin ‘I’m Sick Of You’ anyway, but it’s good to see them included, even if it’s alongside some rather pointless single edits and a few of Iggy’s reproduced 1996 tracks.

Yet the second disc is an entirely different beast: Georgia Peaches is an intriguing live recording of the Raw Power era lineup live in concert, including Williamson. Every bit as raw and rough and ready as its studio companion, it’s been re-assembled from segments of recordings held by a variety of fans and archivists. As such it’s disappointing, but not surprising, that Williamson’s guitar part seems bizarrely shorted out of the opening few tracks, drowned out by Ron Asheton’s crypt-walking bass and frenetic honky-tonk piano. Even without a recording that does it full justice, the band sound as lean and limber as their frontman, tearing through nine songs with the kind of filthy swagger that might be expected, Iggy howling and adlibbing his vocals in between taunting and baiting the audience (the speech from which the bootleg takes it’s name is an exercise in suggestive filth – take note, Lady GaGa). The set is dotted with tracks that never made it to the studio: the extended jam of ‘Head On’, the motorcity rock n soul of ‘Heavy Liquid’ and the Little Richard reductionism of the crudely titled and even more crudely executed ‘Cock In My Pocket’. But it’s left to the very best cut from Raw Power to really make this set shine. Granted, the overextended melancholy of ‘Open Up And Bleed’ has its moments, but who are we kidding: it’s no ‘Gimme Danger’.

Because the live version of ‘Gimme Danger’ on Georgia Peaches captures everything that makes Iggy & the Stooges, and Raw Power, so dangerously addictive. It treads the knife edge between fragility and swaggering machismo in a way that Iggy couldn’t have expected when the record company asked him to write a ballad and he poison penned a twisted love song in response: Asheton’s slumbering bassline, that down tempo percussion and Williamson’s pained guitar mere background for a vocal performance that explains quite why the band suddenly felt the urge to add Iggy’s name to their album covers. Live, it’s reproduced with clear passion; if on Metallic KO you could hear the beer bottles shatter against guitar strings, on Georgia Peaches you can hear Iggy stalk the stage like a hyena and paw at the ground like a dog as he howls about a “girl with the death in her eyes”. And that’s what makes Raw Power and by extension, Iggy & The Stooges, so special. Raw Power is a timeless piece of work not because of it’s beautiful qualities, not because of it’s technical prowess, but because of the passion and emotion that sweats out of every filthy pore of the record. And if that hasn’t come across, I’ve just wasted another thousand words.