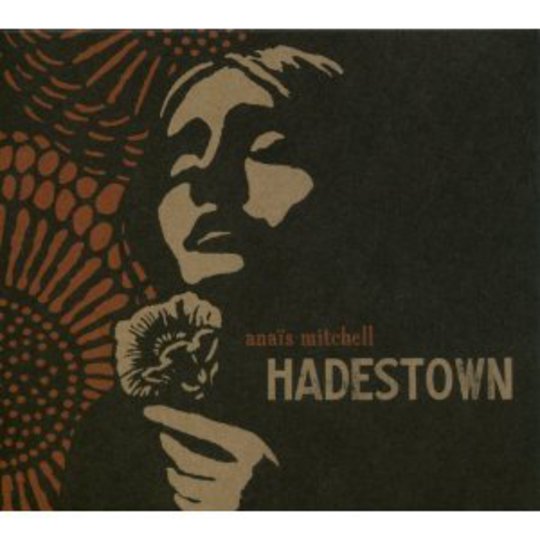 I shall make no bones about it: 2010 has been an outstanding year for albums. We’re only in April and already it’s yielded a slew of ambitious, extraordinary works. From Joanna Newsom’s massive third to Shearwater’s beautiful contemplation of life on remote islands, Titus Andronicus’s coming into their own via a 21st Century vision of the American Civil War to The Knife’s expansive, evolution-themed collaboration, the ‘album’ album has flourished in recent months.

With ‘folk opera’ Hadestown Anaïs Mitchell adds another record to this coveted pile, comfortably aligning herself with Sufjan Stevens, Joanna Newsom and the like in the process: singer-songwriters possessing both the audacity to take on brain-weltingly big concepts and the sheer talent required to pull them off. It is, simply, irresistible, and what follows attempts to communicate exactly how so rather than acutely deconstruct. Because if you can’t wax lyrical about such perfectly realised flights of ambition on sites like this one, then… well. You might as well be done with it.

First though, an admission: Mitchell tells the story of Hadestown better than I ever could on her blog, so it might be worth popping over there (or even here, for the handsome libretto) should it take your fancy. Speaking candidly of its gestation, she makes some interesting points, particularly regards her native Vermont:

I don’t know if a thing like Hadestown could have gotten off the ground someplace else. I don’t know if people elsewhere would have been as game, but in Vermont it was pretty natural; it was like friends and neighbors coming together to help each other out and make some fun: “Oh, there’s a pile of wood in your driveway? I’ll help you stack it” leads to “Oh, you want to write an opera? Sure, I’ll be Hades!”

Hadestown the album is a different beast to Hadestown the stage show that Mitchell originally concocted and toured some years ago, though it’s a far cry from being an afterthought. In choosing to equate the tragic story of Orpheus’s journey to the underworld with depression-era America (a time, the album oft-reminds us, “when the chips are down”), she’s created a prescient take on our modern foibles, prefiguring the financial crisis by a few years. Born out of a strong sense of community and collaboration, frantic rehearsals in an old labour hall and a constantly evolving set of songs and characters, the record serves to document and underline the whole Hadestown experience for Mitchell, as well as flesh out its mythic cast with some of the brightest names on the indie-folk circuit. Perhaps the most important thing you can draw from her words, though, is the goal to “make some fun.” For such a vast, emotionally complex undertaking, the sense that all involved are having a ball is evidenced throughout.

Of course, all this would count for nothing without the songs to back it up, and it’s here where the record excels. For all its grand notions and storytelling nous, there are standalone flashes of brilliance present that any singer-songwriter would be proud to call their own, encompassing jazz, blues, ragtime and gospel. A large part of this is down to the exemplary casting – from Justin Vernon’s turn as Orpheus through Greg Brown’s inspired Hades, The Low Anthem’s Ben Knox Miller as Hermes, Mitchell’s label head and early champion Ani DiFranco as Persephone, the Haden Triplets as the Fates, the original troupe as the literal Greek Chorus and Mitchell herself in the role of Eurydice, each and all get their moment to shine.

The whole piece hangs together so well that picking highlights seems a little futile, but the Vernon-led ‘Wait for Me’ speaks volumes in terms of illustrating Orpheus’s heartache. In Greek mythology Orpheus’s gift for spinning sadness into odes of such beauty made the gods weep, leading to his eventual descent into Hades’ realm and the rare instance of leniency granted him by said deity. Likewise, Mitchell has mentioned how she “laughs for joy” every time she hears Brown make his entrance on the bar-room waltz ‘Hey Little Songbird’, and such is his brooding gravitas it’s difficult not to feel the same. Miller makes for a wonderful Hermes, his demented yowl carrying the first verse of ‘Way Down Hadestown’ with real glee; DiFranco imbues Persephone with lustre and wisdom, while the Haden Triplets provide one of the record’s most deliriously catchy tunes with ‘When the Chips Are Down’. All these artists’ appearances knowingly play on their own cultural status, whether it’s the rambling spirit that informed The Low Anthem’s Oh My God, Charlie Darwin fuelling Miller’s duty as the messenger god, Vernon’s fashioning emotional anguish into universally adored ballads à la For Emma, Forever Ago, or even DiFranco’s acknowledged role as a staunch advocate of independence and femininity palpably seeping into her blighted Persephone.

Among this heady ensemble Mitchell more than holds her own. The opening ‘Wedding Song’ pits Orpheus’s giddy, almost brazen optimism against Eurydice’s well-founded doubts (“Times being what they are”), the pair trading verses over a sunny arrangement that only hints at the tragedy waiting to befall them. Mitchell’s sharp, girlish delivery is a delightful, versatile thing that grows in stature as the album presses on; by the time ‘Flowers (Eurydice’s Song)’ is reached she’s fully capable of communicating the plight that underpins Hadestown, making lines like “Walking in the sun / I remember someone / Someone by my side / Turned his face to mine / And then I turned away” among the most unbearably poignant you’re likely to hear for quite some time.

This is a long review, but in many ways I feel like I’ve barely scratched the surface of Hadestown. There are so many things I haven’t mentioned – Michael Chorney’s fantastic score, for instance, and its subtle amplification of everything felt within; Ani DiFranco’s bold, sultry ‘Our Lady of the Underground’, or how she and Mitchell close the whole affair with ‘I Raise My Cup to Him’; the two ‘Epic’ tracks which fill out the backstory; the consistently strong musicianship; Peter Nevins’ gorgeous print artwork; the parallels to be drawn with our current predicament…but maybe it’s enough. Mitchell traverses such a sweeping range of emotions, genres and styles over the course of Hadestown, it’s frankly remarkable that the whole thing works at all. That it works so brilliantly well, that in under an hour it creates a world you’ll want to return to time and time again, that it is a glittering model of the form – of collaboration itself – is nothing short of awe-inspiring.