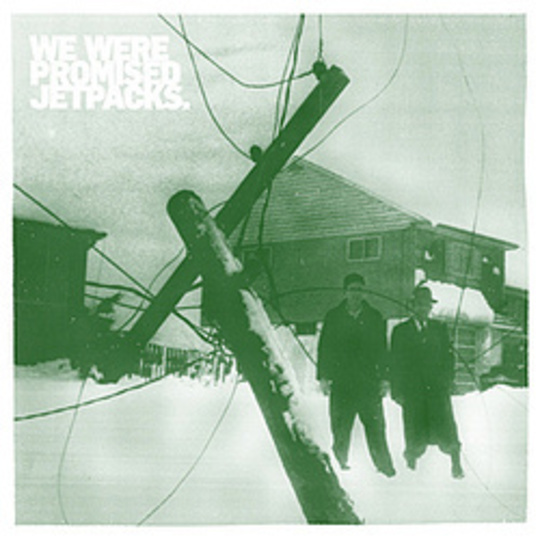 We Were Promised Jetpacks benefit and suffer from sharing a label and, to a certain a degree, a sound with their compatriots Frightened Rabbit and The Twilight Sad. It was the virtue of being the former's MySpace friends that got them signed to FatCat, but debut album These Four Walls sound a little bit familiar and indistinctive in the shadow of Fourteen Autumns and Fifteen Winters and The Midnight Organ Fight. Still, that album showed a great deal of promise nonetheless and they certainly bettered their peers in the sharp anthemic pop song stakes with the likes of 'Quiet Little Voices', while being non too shabby in the epic crescendos of 'Keeping Warm' and 'This Is My House, This Is My Home'.

It is the latter path which WWJP explore more fully on this EP with 'This Is My House...' and 'Short Bursts' from These Four Walls both receiving a makeover with the focus squarely on emphasising their dramatic qualities. The former track, which here serves as the closer, benefits immeasurably from its scaled up arrangement. While the original hardly came racing out the blocks, the EP version moves at languorous pace with the main guitar part replaced by sparse piano chords and achingly beautiful strings, with the drums, which were previously such a driving force, only appearing in restrained form in the last minute of the song's five (two longer than the original). It's to WWJP's credit that they give the song a greater sense of grandeur without pushing the dials into the red or allowing the string arrangements to become overbearing, the end result being a greater intimacy than on the album version.

Equally the new recording of 'Short Bursts' is also a more nuanced and affecting affair than the album version. Guitars chime delicately where previously there were distorted stabs, walls of noise are replaced by a tinkling glock melody and where the drums tumbled with unrelenting momentum the beat now drops out all together leaving only mournful cello and Adam Thompson's resigned sigh of a vocal, where previously he soared. The song reaches a rousing new finale, however, with military snare marches and gorgeous vocal harmonies.

The three new tracks on offer are compositionally and sonically similar to the reworkings, with the exception of instrumental track 'The Walls Are Wearing Thin', a web of gossamer-delicate guitar in a sea of hushed electronic noise, giving the EP a cohesive sound overall. Opener 'Far Cry' begins with brisk acoustic picking with an underlying sense of unease engendered by encroaching waves of shoegazey distortion and ultimately culminating in thunderous drums and thrashing guitar. Perhaps the least effective song on the EP, its explosive outro doesn't feel quite earned and Thompson relies too heavily on the repetition of lines like "I don't want to wake up with dirt in my mouth" to give them weight. 'With the Benefit of Hindsight' is very much in a similar mould, although rather than thumps its way to crescendo the drums give the song a frenzied momentum with a beat pinched from The National's 'Squalor Victoria', a comparison which becomes even more relevant once the string section kicks in, recalling Padma Newsome's sublimely integrated orchestrations on Boxer.

If there is one serious gripe it's that We Were Promised Jetpacks still don't really show signs of distinguishing themselves from their contemporaries and there is, of course, the danger of them sounding a bit pompous and empty if the direction they choose to take with new material is to just stick on some strings and go for the epic (see countrymen My Latest Novel). For now The Last Place You'll Look offers a pleasant taster of the ability they have to write epic emotive songs and the re-recordings here suggest that given enough time they will only get better.