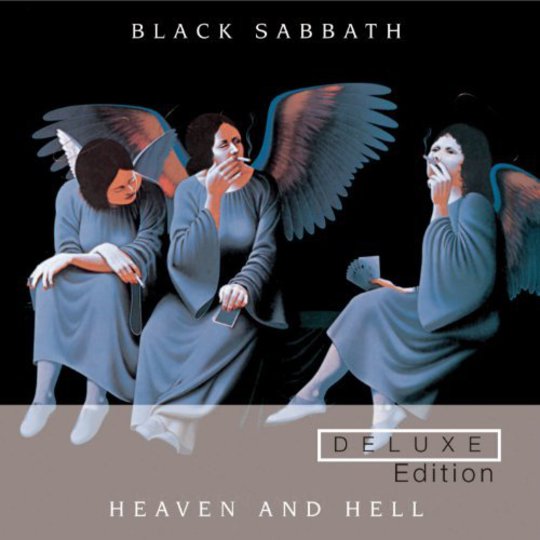 This being Black Sabbath, let's talk riffs. The riffs on the first two Sabbath albums without original vocalist Ozzy Osbourne are by turns grandiose and heroic ('Heaven And Hell', 'Voodoo', 'Children Of The Sea', 'The Sign Of The Southern Cross'), choppy and propulsive ('Neon Knights', 'Die Young', 'Turn Up The Night') and stubbornly static ('Lonely Is The Word', 'Falling Off The Edge Of The World') with plenty of variation in between. Nowadays it's taken for granted that the irreplaceable engine of Sabbath is guitarist Tony Iommi. But when Ozzy left the band in the late Seventies after two commercially and critically disappointing albums brimming with fantastically odd experimentation and detours into uncharted territory, it didn't look like the Birmingham brutalists would ever regain the yobbish swagger of their heyday.

That said, it's worth reminding ourselves that despite the monolithic influence they have exerted, Sabbath's 'classic' albums are patchy and slight affairs, padded out with instrumental filler and other such distractions. It seems unlikely that the concept of 'discipline' had reared its head at any time during the outfit's early career. The recruitment of US-born ex-Rainbow singer Ronnie James Dio necessitated a significant shift in Sabbath's modus operandi. Dio wasn't a loveable hometown loon like the Ozzman; he was a hyper-professional journeyman with 20 years of experience in the music business and a reputation to maintain. More importantly, he could sing with a versatility and reach far beyond that of his predecessor. For the first time, Sabbath had a vocalist and lyricist who could weave himself directly into the fabric of Iommi's riffs rather than simply hover menacingly above them. Take the opening song of Heaven And Hell, the ludicrously exhilarating 'Neon Knights'. There's simply no way Ozzy could have negotiated that breakneck melody with his lugubrious bray. Of course, this also meant that early material like 'Iron Man' would sound strained and awkward when Dio sang it live, but that was a price Sabbath were willing to pay for an extended lifespan.

Faced with such a formidably together collaborator, Iommi, bassist Geezer Butler and drummer Bill Ward had no choice but to tighten up their act. Thus even the longer songs on Heaven And Hell (1980) are punchy and precise, in direct contrast to the extravagant eclecticism that Iommi had insisted on since 1973's Sabbath Bloody Sabbath. Russian choirs, drummer-led ballads and eight-minute modular epics about the group's legal travails were kicked to the kerb in favour of a more manageable level of bombast and an invigorated sense of dynamics. The guitar tone is tidier too, the filth-caked fuzz of yore absent. This reorientation worked in both critical and commercial terms – Heaven And Hell became their biggest seller since 1975's Sabotage. The follow up, 1981's Mob Rules, is less consistently memorable yet benefits from a more abrasive sound courtesy of producer Martin Birch and a more direct and aggressive style of lyricism – on album highlights 'Voodoo' and 'The Mob Rules', Dio sounds less like he's reciting from The Gospel According To Gary Gygax and more like he's visiting some actual tenth-level witchcraft on some poor bastard's sorry ass. Mob Rules is also noteworthy for coming wrapped in one of metal's greatest and least stereotypical album sleeves. Greg Hildebrandt's grim illustration depicts what looks disturbingly like the aftermath of a ritual flogging in a public toilet and prefigures the similarly cliche-busting artwork of Slayer's 1986 classic Reign In Blood.

Of course, certain elements were bound to get lost in the transition. With Sabbath becoming 25 per cent American (50 per cent on Mob Rules as Bill Ward was replaced by Dio's homeboy Vinny Appice) and roughly 500 per cent more professional, the wayward eccentricity that ran amok on Technical Ecstasy and Never Say Die was banished to the back of beyond, at least until Ice T performed a guest rap on 1995's Forbidden. Dio brought to Sabbath the flash and filigree of a Vegas cabaret act, targeting an audience of D&D-obsessed rivetheads and shamelessly pandering to their daydreams of “circles and rings, dragons and kings”. The invisible link between Sabbath and Stateside proto-metallers Blue Cheer, MC5 and The Stooges was decisively severed, and any possibility of real 'danger' (I wiped away a tear of laughter as I typed that word) consigned to the dim and distant past. This is never more evident than in the intro to 'Children Of The Sea', which recalls none other than Cali arsefluff merchants The Eagles. If the early Sabbath that produced 'Children Of The Grave', 'Supernaut' and 'Hole In The Sky' was characterised by its heartfelt, if unfocused, revolutionary zeal, or at least its severe depression at the decline of the counterculture, the latterday model was motivated purely by the instinct to survive. That, and the combined egos of messrs Iommi and Dio. The albums from Black Sabbath to Never Say Die, which veer wildly between recalcitrant sludge, heavy blues, post-psych, jazz rock, acid folk and electronic experimentation, remain difficult to classify when considered separately from the genre they helped bring into existence. Heaven And Hell and Mob Rules on the other hand emerged as generic texts, as unambiguously metallic as the market demanded at the time. Therefore the progress of Sabbath, like that of fellow midlanders Judas Priest, can be seen as emblematic of the progress of metal itself, as the grimy Seventies emerged from detox as the shiny, arena-ready Eighties.

This transatlantic marriage of convenience didn't last long. Dio and the Birmingham contingent fell out over the mixing of listenable but frankly so-so live document Live Evil (1982) and Sabbath's next album, the enjoyably diseased and spittle-flecked Born Again (1983) would feature yet another Ritchie Blackmore associate, Deep Purple's Ian Gillan, on vocals. Sabbath's 1992 reunion with Dio, Dehumanizer, was heavier and nastier than its predecessors, but lacked decent tunes, while the recent Heaven And Hell project has so far proven more or less as effective as one might hope. But as ruthlessly focused as Sabbath are with Dio at the helm, they're rarely badass and never truly weird. When a group's recording career begins, as theirs did in February 1970, with a terrifying evocation of eternal damnation, it's difficult to adjust one's expectations to accommodate the relatively stable and sane outfit of ten years hence. Still, these albums are well-crafted, efficient and spirited crowd-pleasers which represent Dio's finest hour and demonstrate Sabbath's remarkable ability to bounce back from apparently dire misfortune. Great riffs, too.