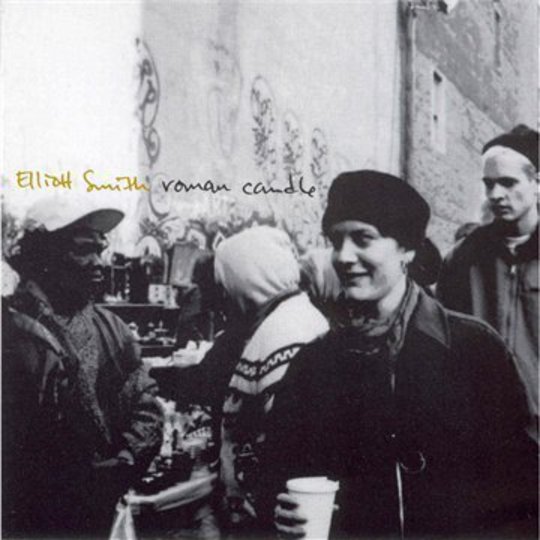 This time the set has been re-mastered by Roger Seibel at SAE mastering, which complicates things – does a lo-fi album whose aesthetic is half of its appeal really need remastering? Thankfully Seibel’s sound changes are gentle enough for this not to be a problem. It’s more of a spring clean than a rearranging of furniture. The evocative squeaks that precede chord changes are still there, Elliott’s voice is still frayed, and the songs still threaten to rip apart.

Opener ‘Roman Candle’ fizzes with distorted guitar, Smith’s ear for melody is on full show - the Beatles-esque approach to song craft that he would deploy to devastating effect later in his career is hinted at here in the electric guitar lines that penetrate the boomy acoustic guitar. His potential is implied throughout the album, but there are one or two moments of unique brilliance. ‘Condor Ave’ remains one of his best moments, the flurry of chords and gentle picking carrying the song on a wind of tape hiss as Smith spins a tragic story ‘I can't think about you driving off to leave, barely awake / To take a little nap while the road is straight’. It’s as good as some of his more lauded moments – ‘Needle in the Hay’ or ‘Between the Bars’ – if a little rough around the edges.

‘Last Call’ is the high point of the album and features Elliott Smith at his scathing best. There are few artists who had the same gift for straight talk. Too often so-called ‘confessional music’ is dismissed as wet or soft – not what granddaddy of the genre Bob Dylan had in mind as he screeched "You’re an idiot babe / it’s a wonder you still know how to breathe" on ‘Idiot Wind’.

There is nothing soft about Smith as he launches a torrent of accusations at the start of ‘Last Call’ – "You’re a crisis / You’re an icicle / You’re a tongueless talker / You don’t care what you say / You’re a jaywalker and you just walk away / That’s all that you do". His guitar meanders around an almost plodding acoustic rhythm, wading into the song, until Smith peels back the layers at the halfway mark, employing a trick that would become a signature move – the shift from first to third person narrative. The shift is devastating as it drags an already tipsy song into full-blown drunken sway – with Smith singing "You start to drink, you just want to continue" in off-kilter harmonies.

When an musician dies – especially young – it’s easy to hoist their reputation aloft to the sky, with new material becoming dot connectors, tangible clues to help understand the disconnect between life and death. At the same time it makes it difficult to give praise without it being lost in the wishy-washy sea of hyperbole. It’s fitting then, that the ultimate tribute to Elliott Smith is the reissuing of his albums – albums like Roman Candle that stand-up for themselves and serve as bittersweet reminders of Smith’s incredible legacy.