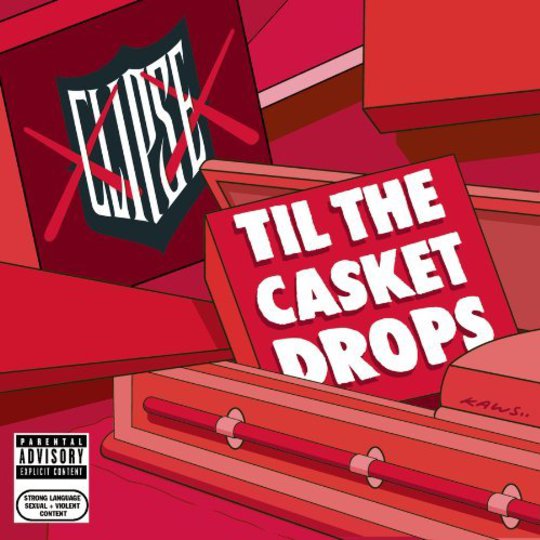 Given Pusha-T and Malice’s last - and deservedly feted – album marked them out as brash, blunt wordsmiths, happy to brag about their cars, their money and their coke deals (for once, it turned out they weren’t exaggerating on that last one , it’s a little surprising that the opening track of ‘Til The Casket Drops finds Pusha in unexepectedly pensive form. “I owe y’all” he intones over stars and stripes stadium rock and strings production. "I just don’t feel nothing, I’m numbed by the will to gain".

Hold up, have the brothers Thornton lost their raison d’etre? Where’s the boasting, the braggaodocio? Where are the girls, the money and most of all the cars? "Never mind my car, careful what you wish for" Malice spits dismissively on ‘Freedom’, single-handedly wiping away everything he espoused on 2006’s Hell Hath No Fury and echoing his brother’s malaise. Seems like the recession has hit the bank balances of hip-hop’s most shamelessly flamboyant duo, and unlike Young Jeezy, they aren’t exactly taking it in their stride.

Fear not, for not every track on ‘Til The Casket Drops is as remorseful as ‘Freedom’, but Clipse’s fourth album proper (if you’re counting 1999's unreleased Exclusive Audio Footage) is still a very different beast to it’s predecessors. In fact, removing Exclusive Audio Footage from the equation entirely, we can see its place as part of a trinity of records. Where Lord Willin’ was a strutting statement of intent, Hell Hath No Fury caught the brothers at the height of their powers. It follows that ‘Til The Casket Drops is the period of quiet consideration, the cathartic purging of two very hubristic souls, if I’m allowed to extend Greek tragedy to hip-hop.

But whilst there’s little resting on laurels to be heard here, it’s not surprising that Clipse’s view of quiet consideration is somewhat different to the average record buyer’s. Witness the mocking refrain of ‘Doorman’: "Tell em line up the Cris, I put ma money on the roof and crush this bitch… Y’ain’t got money like this" which finds Malice back to familiar territory. "Cocaine bought me everything I ever had, and I ain’t never been scared to spend my very last", he taunts over a rolling Neptunes’ bump and grind refrain. And of course, the trademark brags are still there on ‘Kinda Like A Big Deal’, which even finds a grimy guitar driven DJ Khalil beat rubbing off on an unusually un-radio friendly Kanye West ("Got head from a girl in special ed, ya know the pretty ones in that dumb class").

But for every ‘Showing Out’ ("Cause life ain’t nothing but bitches and money") there’s a ‘Life Change’, stealing a breezy and uplifting soul line and plying the kind of remorseful line it’s title suggests. This lends for a disturbingly schizophrenic album: are these the Thorntons who’ve left the Hell Hath No Fury lifestyle behind? Do they spend their days watching Madagascar with their kids, ditching their two-door porsches for luxury SUVs, looking back on their years as drug dealers and hustlers with regret? Or is this all a façade, and underneath it they’re still the same pair of hell-raising, bombastic high rollers they always were? Certainly, there’s a point to be made that ‘Til The Casket Drops never really answers that question, to its detriment.

It’s not just lyrically that this is a different animal: it seems like the added production muscle has given their beats a bit more meat. Rather than the menacingly skeletal bump'n'grind that characterised The Neptunes’ production for the pair to date. ‘Til The Casket Drops is peppered with juicy sounding synth lines, cut up vocal samples and the occasional live drum and guitar track. Doubtless P Diddy’s The Hitmen team is responsible for some of this – witness the low riding ‘Never Will It Stop’ and the bombastic opening track – but even Pharrell’s filled out his beats with purring female vocals (‘All Eyes On Me’). It’s hard not to feel that this is something more commercial than previously attempted.

However, that shouldn’t be seen as a demerit against what is essentially an extremely serviceable hip-hop record. Because, all evidence considered, ‘Til The Casket Drops doesn’t deserve the generally lukewarm response it’s received thus far. Granted, there’s a dropped line or two (see the Katy Perry reference in the frankly appallingly saccharine ‘I’m Good’ and the misjudged Jamaican patois of ‘There Was A Murder’) but this remains an album with few weak points, and plenty of strong ones. If this is the start of Clipse’s mid-life crisis, then wait ‘til they buy Harleys and start having affairs with their secretaries, because then things will start to get really interesting.