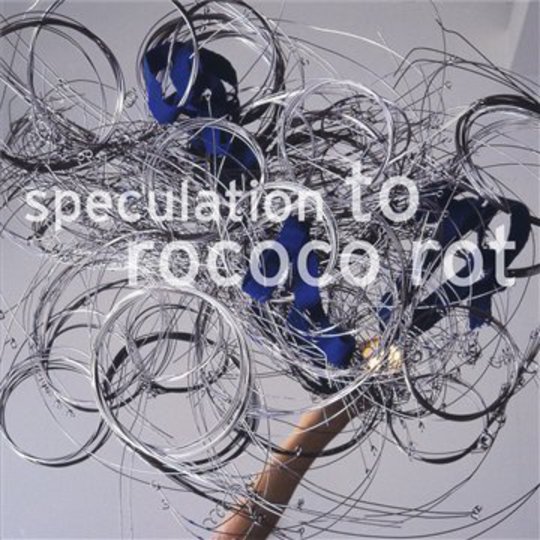 Let’s start at the end. Speculation’s final track, the 10 minute ‘Fridays’ is a departure for German trio To Rococo Rot. It builds from subtle static drone to thick bass dribbles before introducing Faust’s Jochen Irmler, playing his sad, swirling self-made organ. We’re deep in dreamy kosmische territory, it’s miles away from anything TRR have attempted before and the rest of this, their eighth album.

To Rococo Rot have crafted a sideline career out of graceful precision away from their diverse individual artistic pursuits, and Speculation develops their template of post-rock instrumentation augmented by electronica flourishes. The lustrous undulations of first song ‘Away’ show they’re on top form. It’s primed for a tasteful car advert coming soon to a screen near you. It also sets up the recurring opposition at the heart of most of their music: the ‘human’ side of Ronald Lippok and Stefan Schneider’s drums and bass versus the mechanical loops, beats and twinkles of Robert Lippok.

'Away' has a glorious gentle build with minty fresh snares cracking over flopping drum taps. The standout element, as with much of Speculation, is Schneider’s serene bass playing, evoking the sleek cheekiness of Colin Greenwood. When the digital and analogue intersect flawlessly as on divine second song ‘Seele’ the effect is mildly euphoric. It opens with strident, portentous piano chords before sparkly effects somehow confuse and unify the steady bass and skittering drums.

The Spartan joy of the opening two songs isn't entirely maintained with 'Horses' which is propelled by an awkward Allienesque two-note minimelody. That TRR are from Germany and recorded at Faust’s studio would tempt you to look for motorik beats and the spirit of [shudder in advance of dubious genre tag] krautrock, but gently bubbling delights like ‘Bells’ sound a lot closer to the careful beauty of German techno labels Kompakt and BPitch Control than anything so regressive.

While Speculation was recorded ‘live’, the results are so meticulous that the slightest deviation feels mindblowing when listening attentively. Careless toy laser gun shots and unexpected hand claps are perfect on ‘Place It’ but occasionally when one element gets too busy the mood is temporarily ruined. The uptempo 'Working Against Time' feels slightly tossed-off with almost ravey interludes interrupting like a mistuned radio.

Speculation is ostensibly extremely low-key, but there’s a plethora of noises that reveal themselves on close listening. However, as we all know, a really beautiful drum sound isn’t quite enough sometimes. It’s all very well enjoying this in refined detail on a decent sound system but in another context it’s utterly ignorable background music. Which, to me, is totally fine. You’ll never do a banal task so pleasantly as when listening to Speculation, it’s ideal to work to when you need to concentrate but can’t face silence. The diminutive beats will keep you going, the soothing textures will keep you calm.

You or I could shit out pages on how listening to Speculation feels like travelling on a deserted train through future cityscapes at dawn etc etc etc but To Rococo Rot’s restrained class makes such imagery needless. It’s enough to say that Speculation is a masterful lesson in elegance and how to blend minimalism with majesty.