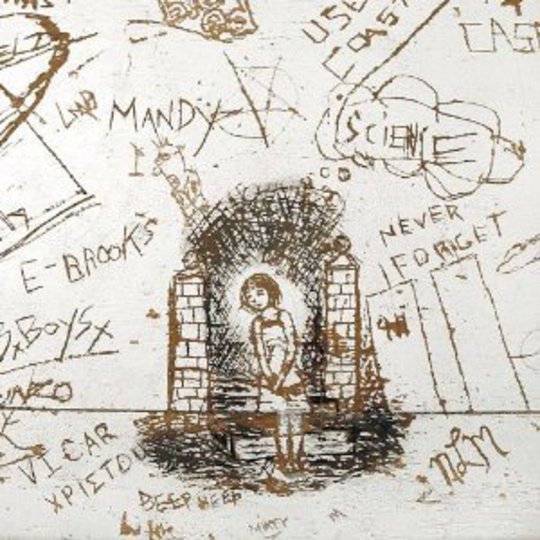 Curious. That’s the word that sprang to mind upon learning that Omaha natives Bright Eyes and Neva Dinova’s 2004 split EP was to receive a reissue from Saddle Creek, featuring two new songs from each party. Surely: just a couple more and give the record its very own sequel? It wouldn’t have been that much of a push, would it? Curious, indeed.

Such grumbles seem moot, however, in light of the product itself. Much like 2002’s Home Volume IV EP (while we’re here: would those two just hook up again already?), One Jug of Wine, Two Vessels wasn’t really a ‘split’ so much as it was a fully-fledged collaboration. Though they’ve shifted location (from townhouse basements to Mike Mogis and Conor Oberst’s home-adjoining A.R.C. Studios), the two bands have effectively picked up right where they left off, expanding a rewarding, if slight diversion into… well, into a fuller and even more rewarding one.

Much of the excitement surrounding this reissue is due to the first new Bright Eyes material since Oberst took a sabbatical from his primary group some three years ago, when he upped sticks to Mexico to record the first of two albums with the Mystic Valley Band before finally getting down to business with the Monsters of Folk project last year. Gratifyingly, his two new originals sound nothing like either of the above – rather, they sound like just the kind of thing that might have found its way onto a Bright Eyes EP circa the early (early) 00s – except louder, richer; more their own beasts than anyone else’s. ‘Happy Accident’ is the pick of the two, a glockenspiel-wielding gem that shudders into life come its second chorus, Mogis letting rip on dirty lead guitar while Oberst trills convincingly regards fate and the nature of happiness in the foreground. All set against cavernous drums and flush with Mogis’s production nous, it makes the woozy, pretty ‘I Know You’ seem almost timid in comparison. (Worth mentioning: anyone searching for political overtones on this disc would do best to either look elsewhere or plumb this latter for allegorical depths, for it remains a deliberately intimate affair.)

But if Bright Eyes are largely responsible for …Vessels’ shimmering highs, it arguably falls to Neva Dinova to gift it a sense of cohesion. Much of this is due to Jake Bellows’ sleepy, almost narcotic delivery. Songs like ‘Poison’, ‘Get Back’ and new opener ‘Rollerskating’ are so sedate they might come off listless in lesser hands, but Bellows’ velvet croon carries them gracefully, with real warmth (his cracked lead vocal on the Oberst-penned final track ‘Spring Cleaning’ is a winner too). ‘Someone’s Love’ is the strongest of the band’s new offerings, finding Bellows ponder overheard conversations and inappropriately lewd thoughts over dense instrumentation in a manner both wry and compassionate.

‘Rollerskating’ comes with that long-time staple of Bright Eyes records: a weird opening sample. This time round it’s spooky pre-pubescent ramblings which, coupled with the old dude at the start of ‘Tripped’ rattling on about time looping in on itself, means that the record now possesses not one but two weird opening samples, and yet doesn’t quite grate. Perhaps mindful of the pitfalls inherent in such things, neither of the two are more than a few seconds long, and being familiar with its original incarnation makes ‘Tripped’ difficult to contemplate without said old dude at its fore.

Elsewhere, ‘Black Comedy’ is still as frustrating as ever – a pulsing two and a half minutes of chamber-pop that bows out just as Gretta Cohn’s stabs of cello nudge it towards well-earned crescendo; ‘Poison’ and ‘I’ll Be Your Friend’ still constitute a slight lull in proceedings (the latter’s lovely flourishes of brass and acute study of inebriation notwithstanding); ‘Get Back’ still tosses off desperately sad couplets like it’s nothing at all; and all those involved still sound like they’re having an absolute ball playing off each other. (One of the original EP’s more charming idiosyncrasies was Oberst and Bellows’ clearly audible studio banter – though there’s none of this on the new tracks, all the original chatter remains.)

So, while the new songs furnish …Vessels with a front-end that’s both muscular and unfamiliar, they also spin it into something grander and harder to ignore. Heck, ‘Spring Cleaning’ has always sounded like a purpose-built album closer – simultaneously sweet, resigned, confrontational and hopelessly pretty; that it now has an actual album to wrap up feels like a logical next step, and one that will resonate all the stronger if you’re yet to make its acquaintance.