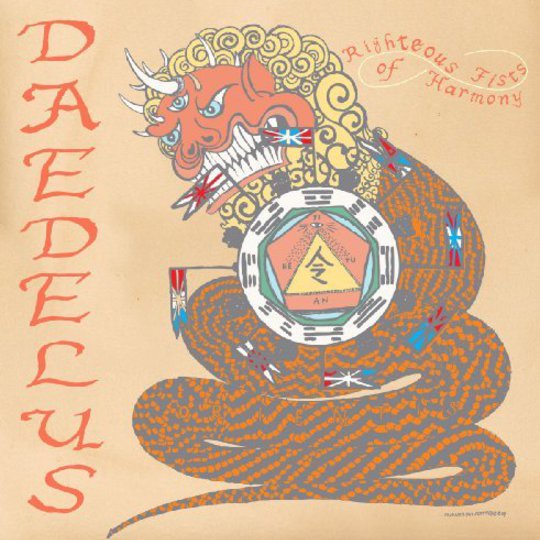 All compositions are essentially conceptual. Whether we’re talking about Raw Power, Illmatic - even Beethoven’s 5th - all music is inspired by the environment, the circumstances and generally whatever’s gone in one of the artist’s ears and swirled around inside before heading out of the other. In the case of Righteous Fists of Harmony, it’s fair to say that its creator has been spending quite some time hitting the history books in active search of his ‘concept’. That’s because the title of electronica polymath and leftfield beatmaker Daedelus’ latest mini album, released on Flying Lotus’s Brainfeeder imprint, is a translation of the name of the Chinese rebel movement more commonly known as The Boxers. Those expecting washes of opium smoke and 1898 mysticism, however. should be advised that this doesn’t exactly do what it says on the tin. Granted, we have the ebbing and flowing ‘An Armada Approaches’ which hums with the menace of an oncoming imperial navy, but overall, it’s difficult to detect any obvious and tangible historical influence on Daedelus, aside from the cryptic song titles and lyrics.

Of course, we shouldn’t have expected anything so simple given Daedelus’ reputation. Whether crafting beats for oddball rapper Busdriver or melding wobbly grooves to clattering percussion and the occasional thrashing string section on his last full length Love To Make Music To, he’s rarely towed the metaphorical line. This time, he’s gone all out neo-classical. Whether building a beat from handclaps and oboes (‘Succumbing To’), or expanding deadened timpani thud and mariachi riff into the squealing free jazz of ‘The Finishing of A Thing’, this a surprising record, even given the self described ‘neo-Victorian’ producer’s history.

Which is all well and good, but when compared to the producer’s other work, Righteous Fists of Harmony lacks something of an edge. There’s no doubt that it’s a bold record, which is what makes it all the more sad that it’s hard to shake the tag of coffee table from many of the compositions: breathy vocals and drifting guitars all too often fading into the background (‘Order of The Golden Dawn’). It doesn’t help that many of the tracks feel like they’re building towards something somewhat more grandiose and eloquent, only to fade into insignificance: the title of ‘Stampede Me’ can only be assumed to be ironic given the nature of the track. What is most disappointing is that for a clearly identified ‘concept’ album, Righteous Fists of Harmony feels very much disjointed: there’s a unity of theme throughout, but the tracks never ebb and flow into each other in the way the listener might hope.

But to write this mini album off completely would be a dangerous thing to do: the final requiem of ‘Fin De Siecle’, for all it’s movie music flairs, is a stirring piece of production, and representative of much of the album: not necessarily groundbreaking, but undeniably pleasant... And given Daedelus’ reputation as something of a maverick, it’s only to be expected he’ll chalk up a few misses when searching for the hits. Righteous Fists of Harmony might not build on his substantial reputation, but equally it does little to dissuade those looking ahead to his full-length release later this year.