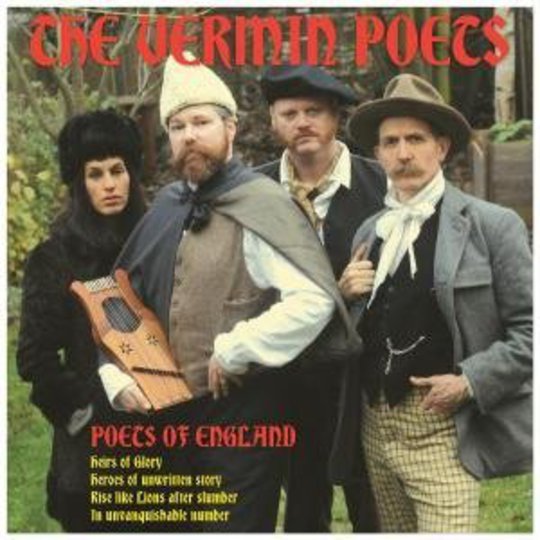 The Vermin Poets are less about emotions than they are about ideas. Most of those ideas are about what it means to be a poet. You haven’t heard so many literary references or suggestions of a bohemian lifestyle since it was part of your curriculum. Poets of England has a definite appeal for anyone who can appreciate a Milton namecheck in between three chords. Amongst this bookishness it’s self aware and self referential--they even have a song called ‘Vermin Poets’ about their less-than glamourous identity.

Oh, and Billy Childish plays bass with them. He does some backing vocals as well. But devotees be warned: Vermin Poets doesn’t have the markings of a Billy Childish project. Actually, the buzzier bits are quite similar to frontman Neil Palmer’s Fire Dept., in the same vein of garage punk but with a less aggressive edge.

Curiously, Pamler’s vocals are often so off the mark that it seems intentional. It would have been a stretch to ever call him a great singer, but his previous work at least suggested he could carry a tune (or at least had enough reverb to compensate). Granted, if singing on key were a great concern, punk probably wouldn’t be the genre you’d turn to. Still, it’s not radically harsh to note that if carrying a tune is already a struggle, acoustic and a capella numbers should be avoided, if only to avoid any obvious awkwardness. If you stick to snarling and shouting, it will at least pass less obviously.

Vermin Poets do play to their name. The songs are rich in imagery and clever turns of phrase, and they successfully capture youthful energy in music and lyrics without sounding disingenuous. And they do have a sound command of the abstract, because it would be very dull indeed if so-called poets were direct in their address.

‘Baby Booming Bastards’ unclearly references either the band itself or their parents: As a song of themselves, it’s quite clever; as an allusion to their parents’ generation, it lacks authenticity as at least one member of the band falls in the noted generation. Both renditions of ‘Grandfathery,’ the tale of family woes and an illiterate grandfather, are charmingly whimsical mindfucks. But whose family doesn’t have their share of problems?

But musically it’s nothing wildly original, and chances are you’ve already heard the best bits somewhere else (like, say, a Fire Dept. record). One aspect Poets of England can’t be faulted for is energy. It only takes one listen through to realise that Vermin Poets would be an ace live band. But if that’s the case, you’d do better to pick up a gig ticket rather than the album.