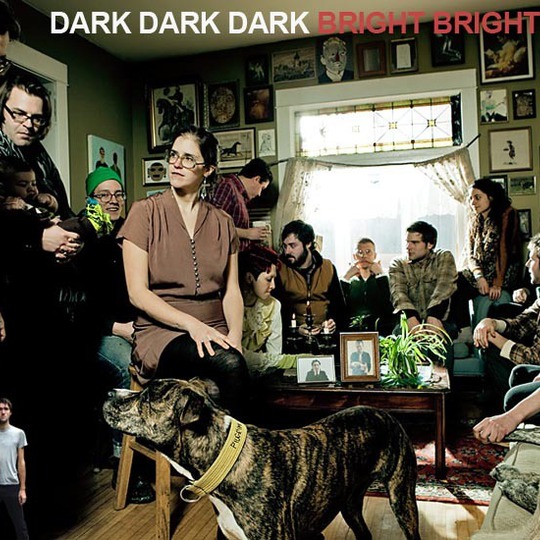 There’s an enviable skill in writing music that sounds contemporary, given the time that passes between a track being written and it reaching an audience. All albums age between being recorded and released, which implies a curious need for musicians to pre-empt the context in which their work will be heard. This doesn’t seem to be a problem for Dark Dark Dark though, whose Bright Bright Bright EP manages to avoid sounding dated – in spite of it being clearly derived from the music of an age gone by.

The vaudeville era is evoked throughout this record, with the accordion-led ‘The Hand’ conjuring images of Tom Waits’ travels down that route. It sets the scene of a New York theatre in the 1920s, or a Parisian café with equal lucidity. The rhythm sways, almost half-heartedly, like a Gallic shrug. It is vocalist Nona Marie Invie that really stimulates intrigue, singing “You don’t remember when you met me in the park/You had your collar up”. It suggests something illicit, that someone is hiding something, but doesn’t tell you what. It keeps you listening, so as to pluck out any other secrets that are tangled up in the accordion’s menacing melody.

Opener, ‘Bright Bright Bright’ on the other hand, is more subdued, and slightly more representative of the EP’s overall tone. On first listen, it’s easy to let the dreamy piano sweep back and forth, and drift off into the background. But doing so ignores the way the song builds, with violins peaking here and there. Invie’s vocals eventually swell, sustained by the band’s backing singers. Drums are pounded to build an orchestral tension that the Arcade Fire create so well.

In fact, it’s best to think of Dark Dark Dark as what the Arcade Fire’s Régine would sound like if she started a band with Regina Spektor. There is all the funereal drama and unashamed richness of timbre that marks out the Canadian’s best work. But this is blended with Regina’s modest quirks, jazzy Slavic flourishes and understated theatrics. The tentatively upbeat ‘Flood’ for example is punctuated with dramatic pauses and call-and-response between the lead performer and her ensemble.

‘Make Time’ takes this further – it is practically musical theatre. Its opening is abstract, with a loosely defined piano pattern and meandering vocals. However, the mood suddenly switches, like an epiphany, with tight percussion, cheerful brass and simple, sing-along choral vocals.

The touching ‘Wild Goose Chase’ brings Bright Bright Bright to a captivating close. It is a story of unrequited love which shows that, beneath their thick skin, Dark Dark Dark are a band of stunning emotional insight.

This is where their strength lies. All too many bands simply try and recreate the music that has influenced them, or write songs that only fit into outdated (and ultimately unimaginative) contexts. Dark Dark Dark are cleverer than that. They take their influences as a given, not a goal, and fit their own context into them. They take what is old and familiar and remould it in their own image – making it at times surreal, but in the way only a stranger can.