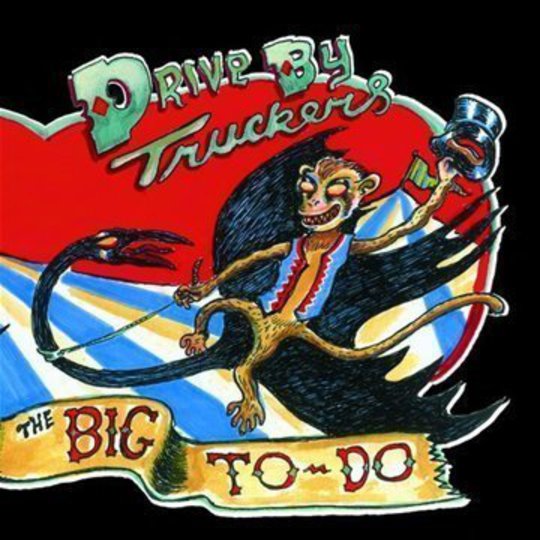 If you haven’t heard the still eminently cultish Drive-By Truckers, as their eighth full-length album looms into view, you might be forgiven for thinking that they’re some sort of comedy redneck band, a touring partner for Hayseed Dixie or some such awfulness.

Thankfully, those that have heard the Truckers will know that they’re nothing of the sort. More of a Southern cousin to The Hold Steady or a more straight-laced My Morning Jacket, the Athens, Georgia group deal in heavy, long-brewed rock, laced with Crazy Horse-style riffs and weighty lyrics rich in musical mythology.

You’ll also be aware that their albums can be long. Really really long. Double concept albums about Lynyrd Skynyrd and Sun Records long. The lack of a strong editing arm is something that has damaged otherwise excellent records in the Truckers' past, their last studio record Brighter Than Creation’s Dark being a particular case in point. So the first pleasing thing to report about The Big To-Do is that it’s relatively concise for this particular group – 13 tracks, with contributions from all three of the band’s songwriting ensuring a range of textures.

What’s also pleasing, if you’re a fan, is that nothing much seems to have changed in the Truckers’ world. Main man Patterson Hood is still singing about the characters on the edges of Southern society, and his eye for detail is as acute as ever. Take ‘Birthday Boy’, a snapshot of strippers' lives that’s packed with heartbreaking lines like: “The pretty girls from the smallest towns/ Get remembered like storms and droughts/ That old men talk about for years to come.” Or the album’s stand-out track, ‘The Wig He Made Her Wear’, based on the real story of a preacher’s wife who killed her husband. A slow burning epic that ratchets up the tension as the story unravels, it’s a masterpiece of narrative songwriting, like a miniature In Cold Blood soundtracked by Booker T.

Hood’s partner in the Truckers, Mike Cooley, is a less prominent voice on this record, but his contributions, alongside those of bassist Shonna Tucker, provide some welcome light to Hood’s shade. His songs – the jovial ‘Drag The Lake Charlie’, or the blissed out sunshine rock of ‘The Flying Wallandas’ – and Tucker’s beautiful ballad ‘You Got Another’ add some real depth to the LP as a whole, and stop the listener getting too dragged down by Hood’s weightier concerns.

Even though this is a relatively concise Truckers record, it does still have a little flab around the midriff, with the likes of ‘This Fucking Job’ and ‘Get Downtown’ adding little to the record as a whole, with the band simply going through the riff-tastic numbers.

Now many LPs down the line, with a steady stream of critical acclaim behind them and a devoted fanbase, it’s good to see that Drive-By Truckers can still come up with tracks that rival anything they’ve previously produce. That they’re still falling into the same occasional traps they’ve always done is frustrating for anyone hoping they could find a wider audience, but you suspect that the band are pretty happy staying on this same path. Those who haven’t heard the Truckers can continue to pass them by, those that have can continue to look forward to more of the same.