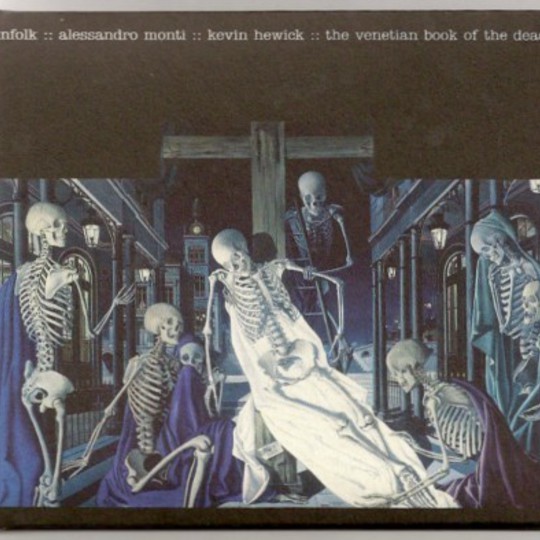 Thanks to the wonders of modern technology no-one one listens to albums anymore. The ease with which people can access songs and download songs has destroyed people’s attention span and rendered the idea of the album as a complete body of work almost entirely obsolete. Or at least, this is what the music industry types like to tell us. It’s one of the many horror stories that are linked with the digital music age. Yet this is a week in which Joanna Newsom and The Knife release multiple CD concept records to uproarious acclaim, and here we have an album comes along with not one, but two concepts tying the whole thing together. With a title as heavy as The Venetian Book Of The Dead, you know there’ll be some learning involved.

A collaboration between the Unfolk collective of Italy and Leicester born, Factory records alumnus Kevin Hewick, The Venetian Book Of The Dead deals with the industrial disasters that occurred in vinyl factories in Venice in the Seventies and Eighties, which saw many workers and citizens die from cancer. The album also addresses the idea of vinyl as musical entertainment, as opposed to the cause of human tragedy. Two somewhat heavy concepts for the price of one; at times they make for a challenging listen, but it’s one that is ultimately rewarding.

‘The Radioactive Man’ opens our story with its descriptions of factory workers and “what they’d touched and what they’d breathed had woken cancers from their sleep” and the protagonist's family will “get as infected as I am”. It’s far from cheery stuff and sets the rest of the record’s mood. Elsewhere Hewick addresses the subsequent cover up of the problems on the part of the factories' owners, with a description of “cover up killers” and the claim that “we know something we won’t tell” (‘The Cover Up’). ‘Black Tar Lagoon’, probably the highlight of the record, sees Hewick’s soulful croon matched against a sparse backdrop of gentle bass work and delicately placed keyboard squelches.

Musically, most of The Venetian Book Of The Dead stays within a certain set of parameters, somewhere between the post-rock meets folk of A Silver Mount Zion and the indie rock with additional electronic flourishes of Radiohead. Unfolk utilise their small collection of instruments to great effect. The majority of songs feature little more than mandolin, electric bass and some keyboard swells, though at times strings and electric guitar are thrown into the mix. Regardless of instrumentation, Unfolk always display a remarkable amount of restraint, always seeming willing to hold back where most bands would let go. This less is more approach creates a very sparse and eerie soundscape, invoking images of abandoned factories and long forgotten about machinery. Which is no doubt the idea.

The idea of producing a concept album about industrial fallout in a time when substance in records is scarce is a brave one. Whilst the lyrics may seem a little clunky at times and lack a degree of subtlety that might be a little more appropriate, and even though it clocks in at over an our long, The Venetian Book Of The Dead is a challenging record. It’s also one that challenges the listener, and engages them. It requires repeated listeners and ultimately reveals itself to be a worthwhile, rewarding piece of work.