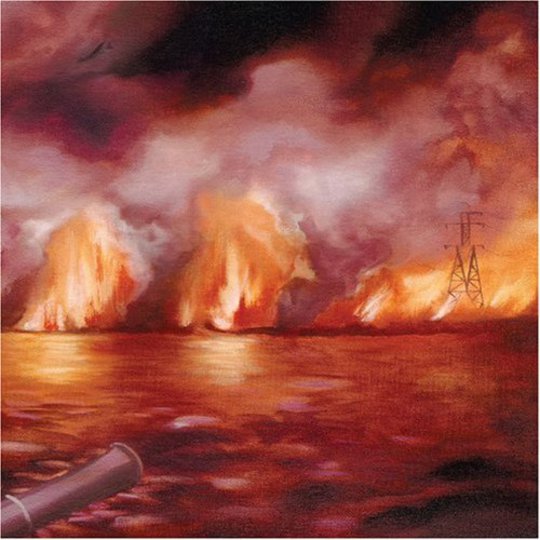 With this, their third album, The Besnard Lakes have crafted an elegant apocalypse of a record, a world where the atmosphere is forever dictated by the fallout that locks everything in crepuscular gloom, dispelling any conventional sense of time or place. Like the fire and smoke that create a heady mix of orange, purple and red on the album’s cover, any sense of beauty comes from a dead eyed fascination with the vengeful splendour that engulfs the horizon. Even Jase Lasek’s explanation of their moniker hints at the theme of human isolation in the face of a grand and powerful beauty. ‘I grew up in Regina, Saskatchewan and in 1995 I started travelling up to Besnard Lake as a summer trip with my friend. We loved it so much we made a promise to return every year to clear our heads… It’s a very secluded place, and very hard to get to. You really feel like you are the only people there.’

...the Roaring Night is by no means a perfect record, and there are minor flaws to stand alongside the frequent moments of brilliance, but what cannot be questioned is how skilled they are at shaping layers of sound to form an enveloping whole, with each overlapping texture or shifting tempo plunging the listener further and further into the darkness. In an analysis of another group of Canadians carving their way through a predominantly American tradition, Greil Marcus comments on The Band’s lyrical style. ‘The lyrics are blind baggage, and they emerge only in snatches’. It is the same here where the lyrics act as fever dream, sometimes subdued and murky, sometimes upfront and sharp, but mostly with all thought of narrative clarity substituted for a sense of hypnotic lyrical repetition that allows words and phrases to flicker and fade and rise like a battered zoetrope. As Marcus goes on to state, ‘such a [lyrical] style also seems to link up with an older tradition: the instinct of the American artist to put his story in disguise, to tell his story from the shadows, probably because that is where he usually finds it. Those who mean to seduce do not announce their intentions through megaphones’.

The album begins with a stuttering radio transmission that comes across like a blinking epitaph for an abandoned planet as it struggles to compete with the swirling echo of a building storm. Lasek’s cut-glass falsetto arrives and urges the song to build until the swirl is replaced by the sturdy authority of drums and guitar. The song dips again before an eventual rise to a muscular plateau and a guitar solo that wants nothing less than to eclipse everything that has come before it. In many ways, this is the now trademark Besnard Lakes sound, delicacy giving way to a slow build until the inevitable explosion. As Lasek says, ‘I’ve always been interested in the “epic”, exploring dynamics… You know I don’t want to tout ourselves as the quiet-loud-quiet-loud band, but I am enamoured by that dynamic thing’, and it’s a testament to the band’s quality that the style rarely feels staid in its formula. But they are at their best when offering up a finely balanced dynamic between fragile and haunted beauty and a thudding, propulsive blitzkrieg, so at times their interest in exploring the spaces of more classical rock forms can deflate the tension and bring the sound to an almost numbing consistency.

I’ve noticed the word dirge mentioned in relation to the band before, which may be unfair, but their most disappointing moments on record are almost always the times in which a song settles into a leaden, nodding-dog rhythm. The only really forgettable song is ‘Glass Printer’ which hits the ground running in its steady psychedelic groove with little variation throughout, slowly eradicating all sense of possibility and threat. It isn’t an awful song, and their ability to settle into a repetitive driving rhythm is obviously not in itself a bad thing (see album opener ‘Like The Ocean, Like The Innocent Pt. 1: The Ocean’ for example), but nonetheless ‘Glass Printer’ feels sluggish and just disappointing when you think that the band are capable of creating songs as dense and beguiling as ‘Because Tonight’ or ‘Rides the Rails’ from previous album The Besnard Lakes are the Dark Horse. But this is only one low point on a record scattered with stunning moments, from the Slowdive and MBV channelling shimmer of ‘Albatross’, to the insidious motorik pound of ‘And This Is What We Call Progress’, but above all the breathtaking ‘Like the Ocean, Like the innocent Pt.2: The Innocent’, showing that when they perfect that balance between ephemeral delicacy and soaring grandeur they sound ready to blanket the entire world in their shadow.