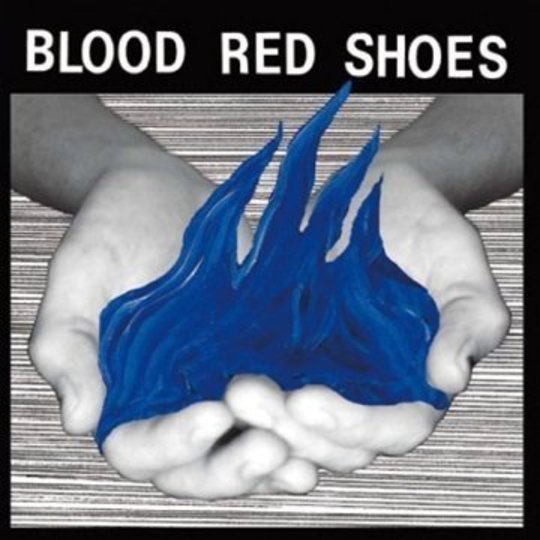 A little under two years ago, the unlawfully pretty Brighton two-piece Blood Red Shoes released their debut album Box of Secrets. At the time the general consensus (if such a thing could be said to exist) was that it was a good first effort, if a little overproduced. It’s not unfair to say that the record didn’t quite capture the full effect of their live shows, which at their best are deafening and visceral experiences. It might have been that the frustratingly protracted process of getting the album released left them too much time to meddle with the recordings, meaning some of the rawness which made them so enticing in the first place was lost. Either way, while this didn’t exactly spoil the album, it still meant that each listen was accompanied by a very faint feeling of disappointment at what it might have been.

Follow-up Fire Like This comes with a promise that the superfluous gloss which beset its predecessor has been scraped away, as the record was recorded to analog tape with a bare minimum of overdubs. This seems to be a more logical way for a band like Blood Red Shoes to work, and one which is far more in keeping with their aggressive, elemental sound.

Recording processes aside, the album actually has quite a lot in common with Box of Secrets. The band haven’t reinvented the wheel here, but they’ve taken the blueprint of their debut and built on it. For instance, their effortlessly skilful utilisation of the quiet-loud dynamic is still present, only this time infused with a little bit more subtlety. The vocal duties are once again split fairly evenly between Steven Ansell’s throat-shredding yells and Laura-Mary Carter’s sweetly bolshy singing. The interplay between the two is as effective as ever, which is just as well because their chemistry has always been one of the band's strongest assets, whether live or on record.

Where Box of Secrets only really had one mode - breakneck speed, this is an album with more layers to it. The most obvious example of this is ‘When We Wake’, on which Laura-Mary’s gently introspective vocals are set to an atypically slow-burning backing which eventually builds to a beautifully colossal outro. The result is one of the major highlights of an album which is hardly short of them. Closing track ‘Colours Fade’ is another departure, clocking in at over seven minutes, taking on a far more epic feel than we’d normally associate with Blood Red Shoes.

The instances of experimentation (with a resolutely small e) have definitely lifted the band up a level or two, but they haven’t forgotten their major strengths either. Fire Like This is liberally peppered with their typically punky shoutalongs. Recent single ‘Light it Up’, for example, is Nirvana-esque in its devastatingly simple (and completely exhilarating) make-up.

As noisy as Blood Red Shoes are, they still know their way around a pop hook, and there are plenty here, possibly even more than there are on Box of Secrets. It‘s ironic that a heavier album, shorn of studio trickery should contain more radio-friendly songs, but there isn't much on Fire Like This which would sound out of place as a single. ‘Don’t Ask’, for instance is a breathlessly urgent way to open the album, while ‘One More Empty Chair’ is another exemplary piece of snotty, melodic pop.

To be quite honest, it’s difficult to resist the urge to pick out every song and highlight it as a focal point, because Fire Like This is so strong from start to finish. This isn’t really anything new, because Box of Secrets was similarly consistent. What is different, however, is the focus the band have found. In the past, there’s been an unfortunate tendency to take songs a chorus too far, but that doesn’t appear to be an issue any more. This is one of a few imperfections Blood Red Shoes have managed to overcome with their second album. The only problem they have now is that they haven’t really left themselves much room to improve for album three.