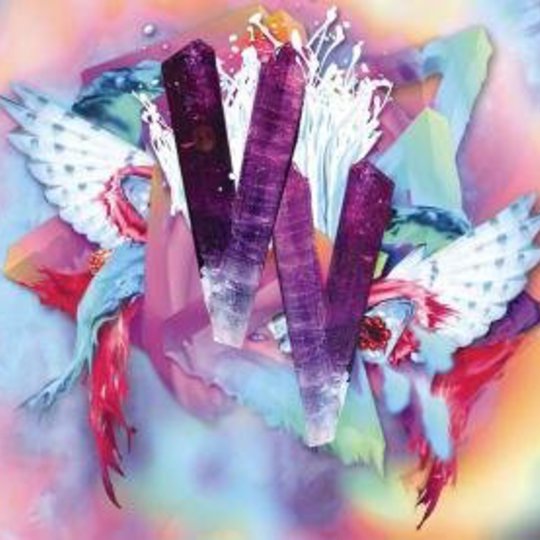 There is a conflict operating at the heart of Origins, between the warped romance of My Bloody Valentine and the murky electronics of Team Sleep or Amber-era Autechre. Dark and light are mashed together into a cold, nebulous mass of and synths, reversed vocals and intermittent percussion. The lack of clean lines distinguishing constituent parts is perhaps the defining feature of Origins; definition, apparently, not being something VoicesVoices (aka Nico Turner and Jenean Farris) suffer gladly. Instead, the five tracks on this Prefuse 73-produced EP deal in lithe textures which slide from one hazy melody to the next, some unsettling, some soothing, but mostly sitting in the grey area between.

The influence of Mr 73 (aka Guillermo Scott Herren) can be felt keenest on opening track ‘Flulyk Visions’, where a thin dub beat underpins expanses of vocals made unintelligible through electronic treatment. Slivers of synth and guitar billow like ribbons through the mix, and although it’s easy to see Prefuse’s mastery of studio dynamics in the excellent balance between the multitude of frequencies on ‘Flulyk Visions’, his touch is also noticeably light. The work of VoicesVoices is reliant on the most delicate of propulsions to drive its sonic vapour trails, so none of the precociously abrupt cut-and-pasting of his work under the Prefuse 73 moniker is really evident here. Instead, one suspects he came to the studio not as any one of his monikers, just as someone who knows how to bend a mixing desk to his will, just vibing off whatever VV were bringing to the table.

Track two, ‘Out From Under’, has the pastoral, soaring dynamics of Sigur Rós and the only snippets of recognisable English on any of the songs here. It is probably the standout track if only because it feels less contrived than the others; more open to letting a dominant melody establish a narrative direction than relying on the same icily detached vocals to do all the work.

The strength of ‘Out From Under’ exposes the weakness of the rest of EP; everything is terribly impressive and texturally nuanced etc, etc, but there is not much of anything to drive the tracks towards a satisfying resolution that would make you want to listen again. It’s hard to tell if impenetrable abstraction is the aim of VoicesVoices, or the result of a faltering first step towards the realisation of their intentions. There is enough on Origins, not least the minimal-yet-intricate ambience of closer ‘Sounds Outloud’, to hope that it is the latter.