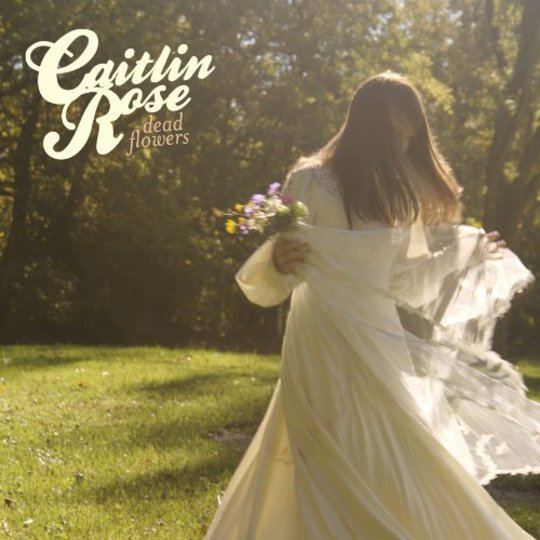 When you’re 22 and living in Nashville, Tennessee, there’s not much to do but go out – drink, smoke and watch people. But newcomer Caitlin Rose seems to be making the best of it, picking up a guitar and penning witty, endearing new-folk-country tales chronicling the goings-on in the Southern-cosmopolitan, musically-enriched anomaly that is Nashville. Although Rose's Dead Flowers EP is her second release, it’s the first to hit the shores of the UK properly – fittingly, to a medium amount of (well deserved) hype. Dead Flowers is a seven song effort peppered with covers – one, so important to her, that she named her EP after it – but the balance is right, five original tunes and two other people's.

‘Shotgun Wedding’, ‘Answer in One of These Bottles’ and ‘Docket’ are the shining stars of Roses’ self-penned material. Her songs chronicle the wry side of Southern life, taking some stereotypes and inserting her droll sense of humor to turn them into unfussy, relatable tunes. Take for instance ‘Shotgun Wedding’ where she simplifies the entire process with a sardonic smile, “Meet, conceive and marry / True love’s a shotgun wedding”; it's hard not to listen and laugh aloud. On ‘Docket’, the most splendid song on the EP, she croons, “I got a fresh pack, I got a red Bic / the Surgeon General can suck on my dick woah-oh-oh / I got a docket in my pocket, it says cancer’s never catching up to me”. ‘Answer in One of These Bottles’ is destined to be a crowd-pleasing sing-a-long with Rose’s self-aware mantra “Drinkin’ one, Drinkin’ two / I’m a drinkin’ just for you to find out what it is that happened to my heart / There’s an answer in one of these bottles”.

Rose’s default vocal setting seems to be this sweet talk-singing intonation which works on her alt-folk-country songs but on her Patsy Cline cover, ‘Three Cigarettes In An Ashtray’, Rose morphs into a dark, husky, booming chanteuse singing to a small crowd in a dim bar. It’s a beautiful cover and is just a glimpse into what this girl can do vocally. It’s a departure from her original material, but it’s hopefully also an inkling of what will be to come. Repeat listens are necessary. The other cover, of the Rolling Stones’ ‘Dead Flowers’, is also successful, although not as illuminating as her Cline reworking. Her vocals do stand out on this slowed down, (even more) countrified version, and while it was what originally attracted me to this EP – the great surprise of it all was that her own material outshines her cover choices.

The five original tunes here are old – Dead Flowers was released in the US in 2008 and it is important to remember that. Musically, for the most part, they’re unadorned, acoustic, economical vehicles to show off her song-writing skills and her voice. And in some way, the simplicity of these songs almost belies the talent that Rose displays lyrically and vocally – but in remembering how old these songs are, its clear that this is a jumping off point for her, not the be all end all of her talent. Waiting to see where she takes her acoustic folk-country tunes is the exciting part, but listening to her Dead Flowers very definitely whets the appetite.