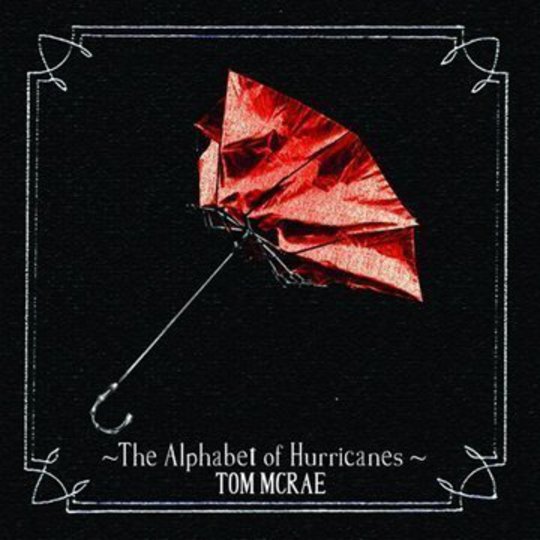 You are singer in possession of both an acoustic guitar and a penis. You are therefore both the next Nick Drake and the next Bob Dylan. Tom McRae’s 2000 self-titled debut earned him the inevitable comparisons. While he was never able to live up to such accolades, he created a powerful sound that was all his own. That first album was full of sadness and beautiful anger, the two that followed an evolution of his sound if a reduction in the power of his rage. Sadly The Alphabet of Hurricanes continues the malaise introduced by the hugely disappointing previous effort, King of Cards. There are bright spots, but there has been little musical growth in the three intervening years and far too much is borrowed and repeated from his previous work. The most apt comparison it seems is to himself.

An integral part of Tom McRae’s work is the earnestness of his delivery. It can grant great emotional power to a dark and haunting song, as on the stunning 'My Vampire Heart' from third album All Maps Welcome. It creates a melancholy longing that works perfectly on 'Bloodless', from his debut. When he ups the tempo, that earnestness can bring you along, usually translating to genuine fury, as on the fantastic 'End of the World News', also from his debut. Yet this is his fifth album. Perhaps it’s exhausting being so earnest all the time, but here, as on King of Cards, it rings a little false, as if he’s really tired and deep down maybe just not that bothered anymore?

To accentuate the positives on this record means not yet praising McRae himself, as the best thing on the album is a track with no vocals and just a couple of brilliantly played clarinets, for which the credit can only be given to a Mr Brad Gordon. 'A is For…' is a minute long and while it does serve as an effective intro to the disappointing 'Won’t Lie', it stands alone as a surprising and perfectly executed instrumental interlude.

'Told My Troubles to the River' is a nice upbeat number. The intro shows off McRae’s ability to construct a song. As the guitar plucking begins it’s uncertain where the sound may go, then the maracas and light strumming slowly build, after a first verse of his mildly distorted vocals, a brief drum beat plunges you into the flowing river, carrying you away with its current. Although, is describing a confession to the river a lyrical cliché? If it isn’t then it certainly feels like one, which is all that really matters. The best songs here contain tempo. 'Me and Stetson' continues McRae’s fascination with the American West (see also: 'Summer of John Wayne' and 'How the West Was Won'). The undeniably funky guitar combines well with the handclaps and some nicely used brass. The slightly distorted, raw and shouted vocals excellently mollify that ever-present earnestness. As the crescendo builds towards the end of the song there are some barely audible but pleasantly incongruous electronic beeps. Musically it’s probably the most interesting track on The Alphabet of Hurricanes.

The real problem with Tom McRae’s latest album is that it’s just too similar to his previous work. A significant proportion of these songs would fit unnoticed in perhaps all of his previous albums bar his debut. Yet worse than that, a few of the tracks feel like re-workings of specific songs in his back catalogue. The slow piano and soaring vocals on 'Out of the Walls' are strikingly similar to 'Still Lost' from All Maps Welcome. The sustaining distorted guitar combines again with those soaring vocals just as effectively on 'American Spirit' as previously did on Hummingbird Song. It’s not great to be derivative of any album, but to be derivative of an album you recorded yourself five years ago is particularly unimpressive.

There are other problems. The closing two tracks are insipid. 'Best Winter' is a very dull song about a winter in New York spent singing songs and being cold. It’s the best winter he remembers. You won’t care the first time he tells you this, and after eight repetitions it sounds more than anything like he’s trying to convince himself. 'Fifteen Miles Downriver' is similarly dull, once again rather lazily using the river and the ocean as a shortcut to emotional resonance. Why can’t we have a heart-wrenching ballad about a puddle?

Tom McRae can make brilliant music, he has done so in the past. Yet The Alphabet of Hurricanes is evidence that King of Cards was not a blip. Gone is the rawness of his debut and the innovation of its two follow ups. More worryingly, he’s missing the emotion that made those records so potent. He just doesn’t seem to care as much any more. It would be a real loss if he were unable to regain what he’s lacking, the man is a talented musician and an excellent songwriter, though Nick Drake or Bob Dylan he is not.