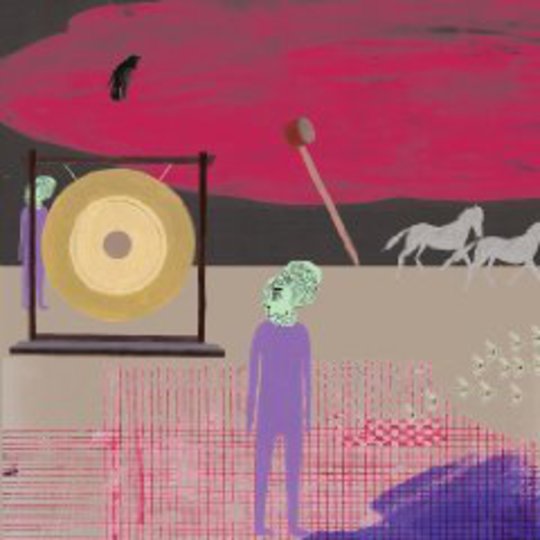 It’s funny how every article concerning Quasi always begins with a sentence involving the words ‘side project’ – including this one it would appear – when they’ve now outstayed the bands the primary musicians were in (Heatmiser and Sleater-Kinney).

Perhaps it’s because they’re a hard band to categorise, with each subsequent release trying something new. Indeed, if one criticism could be made of the band's output in recent years, it’d be that it shoots off in so many tangents that it’s hard to view the records as complete works; you sense there’s a stupendous Best Of lurking in amongst the innards just waiting to be plucked, but that - like The Fiery Furnaces - sometimes the breadth of ideas and stylistic variation slightly smother the songs lurking underneath.

There’s still the odd song here that’ll be a divisive issue for even hardcore fans of the band (such as the oddity that is ‘Laissez Les Bon Temps Rouler’) but thankfully American Gong is a far more coherent and quality controlled record than the bands’ previous two or three outings, their best for some time. Part of that is down to the fact it ‘feels’ a bit more substantial, partly down to the addition of occasional collaborator Joanna Bolme on bass (Stephen Malkmus & The Jicks), almost definitely due to the mixing being shared between Dave Fridmann, Tucker Martine and Steve Fisk, and in no small thanks to the raw songs on show.

‘Repulsion’ is a devastatingly fine opener, highlighting how much more limelight Sam Coombes’ guitar lines will hog than normal and ditching the keyboards of old entirely; it cackles with restrained venom, and gets backed up by some wonderfully psychedelic dual vocals and couplets ("I hit the bed and I pull up the sheets / I’m stuck in this rotten lump of meat"). There’s a distinct classic-rock ‘n’ roll feel to the whole record in fact, veering from the wonderful harmonies and soaring guitar in ‘Bye Bye Blackbird’ and ‘Rockabilly party’ through to Janet Weiss’ ever stupendous drumming on ‘Little white horse’ and Coombes’ curtain call to "rise up" on ‘Now what’.

Lyrically, Coombes has again kept it simple and stuck to rhyming couplets, a trait which means sometimes the lines are wonderfully succinct ("Day bears the night / Night bulls the day / It just don’t seem right to just piss it away" – The jig is up) and sometimes they’re a bit… well, Bernard Sumner-esque. But there’s an inherently joyous delivery to them that offsets their recurring themes of age and mortality from start to finish.

More than anything, theses theme combined with the scene-stealing guitar solos, the ever glorious Weiss-created rhythms and the more focussed musical direction leaves American Gong feeling like a rebirth of a band too often dismissed as an afterthought.