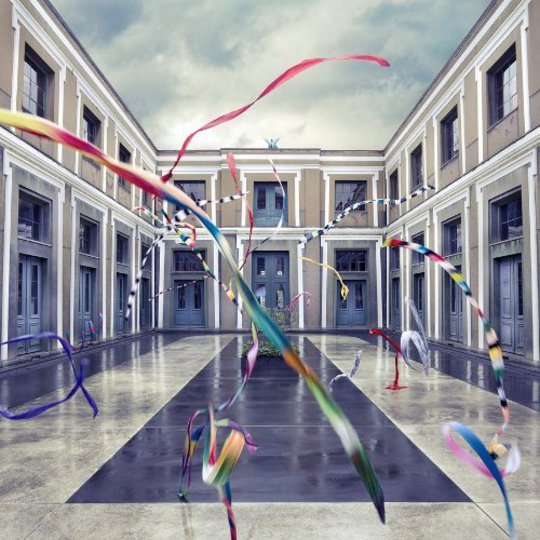 Bands that eschew the traditional guitar / bass / drums / synths line up are often paraded as innovators, or something special. Witness Beirut, or Patrick Wolf, both of whom started off without guitars (although Wolf has since reneged on that), and focused on ukeleles and accordions and other marginalised instruments. It certainly works as a way to draw attention to oneself, as a conscious rejection of the dominant paradigm of the music world.

And that is, perhaps, why Efterklang's previous record proper, Parades was on the receiving end of one of those ever so rare and prestigious DiS 10/10 ratings. Or perhaps it was because it was one of those special albums that doesn't obviously draw on anything that came before, but instead carved its own path through subtle shifts of mood, and intricate arrangements that withheld their secrets for several listens. It had that rare quality of 'newness', much like Beirut and Patrick Wolf did when they first appeared. Hopes are thus high for this third set.

Parades was a record that was as familiar with the orchestration of classical music as the melodies of pop. And it is the pop that comes slightly more to the foreground on Magic Chairs – it's a much more immediate record for it. 'I Was Playing Drums' and 'Harmonics' appear simple tracks, but repeated listens reveal the complexity within. The record works on this synthesis between melody and intricacy. First single 'Modern Drift' works on a simple piano line before shifting into ever more elaborate arrangements of brass and strings and woodwind.

The scoring is frequently special – the delicate violin lines that feature on 'Mirror Mirror', before the song soars away, crescendoing into a swooning chorus, are just one example of the many instances of wonder. The instrumentation means Magic Chairs cultivates different moods with ease, from the swagger of 'I'm Playing Drums', to the paranoia of niggling guitars on 'Raincoats'.

A minor flaw is apparent on 'Alike', in that vocalist Casper Clausen seems to be channelling Chris Martin's stylings. Fortunately, the interlocking brass, vocal and guitar lines that fill the tail of the track dispel those comparisons soon enough. The nature of how Efterklang operate means that the words become less important, the vocals just another component to be utilised in the arrangements. The majority of the album is without voices, or with wordless voices in choir.

Some parts of Magic Chairs don't match up to their predecessor. 'The Soft Beating' is yawnsome, the song lacking the beauty or momentum of the rest of the album. There's something about 'Scandinavian Love' as well, be it tempo, or a part missing somewhere that would have tied it together, that means it doesn't feel congruent with everything else. It seems complete, but something about it feels half finished.

Magic Chairs is an album that understands the importance of harmonies, and the importance of the score. Van Dyke Parks (semi) famously presented an overjoyed Joanna Newsom with the score for Ys. A similar reaction could be expected were it ever to happen to Efterklang. The collaboration with The Danish National Chamber Orchestra for Performing Parades made, and still makes, a lot of sense. For this record is one which plays with the timbres of the orchestra: violins, cellos, trombones, flutes, anything, and does so successfully, utilising the sounds to make something that draws on music hundreds of years old, and music years old, to create something else. And for that, we can forgive it its minor, sporadic flaws.