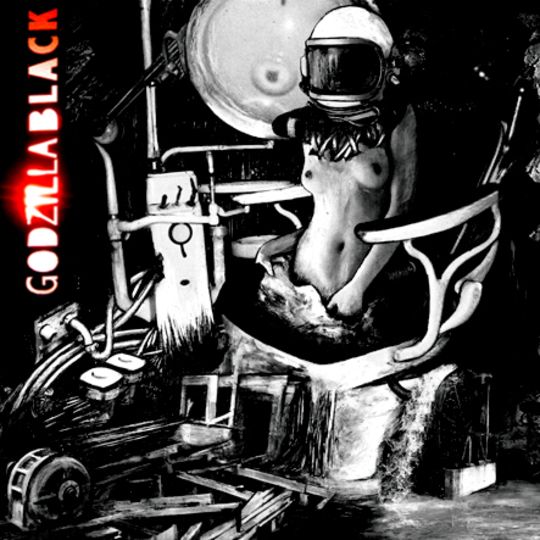 When an artist makes it their prerogative to make their debut album free, it’s more than admirable. It demonstrates a desire to make their name known above all. With Godzilla Black's self-titled debut, that delight is only emphasised by the quality that on offer here. Godzilla Black rides on a wave of fright-ridden sleaze rock, and its existence in such a monetary-free realm could certainly leave some more named acts scared indeed.

Opener ‘Fear of A Flat Planet’ sets their sordid tone. How could it not with a lyric like "I’m the kinda girl who makes you wanna get a sex change"? Its rolling drums and tribal ambience is counterbalanced with shredded guitars and a rolling stone of a bassline, not dissimilar to the artier end of Mike Patton’s oeuvre. That Patton-esque schizophrenia is fully intentional, of course. The swift change from ‘The Bad Place’s Future-Of-The-Left-meets-The-Paper-Chase racket into the blood curdling screams suffixed ‘From Here To Clare’ induces a weird kind of screamy, bloodstained reaction that Godzilla Black want you to feel. The sense of being ill at ease is where Godzilla Black lurk. That last track manages to break from a sped up surf style riff through to an ear bleeding scream; the effect is almost preposterous.

While the band obviously have a degree of playfulness in their approach, the underlying theme of Godzilla Black is that of horror. Not genuine, soul engulfing stuff. More homage to Raimi’s Evil Dead oeuvre. Godzilla Black could soundtrack some kind of ironically highbrow B-Movie slasher with ease. Come ‘The Drought’, matters become far more urgent, and again emphasising that darkened undertone. The music shifts gears into a noisy rock’n’roll riot, overlaid with Sweep The Leg Johnny-style saxophone dramatics, conjuring to mind some kind of chase scene involving a bludgeoning with a blunt object. None of it is pretty - it never sets out to be. But it certainly is fun; an aspect taken all too scarcely in heavy music, but one that Godzilla Black resonate with aplomb.

Obviously this collision between saloon-style spaghetti rock and jugular-aimed metal heaviness could leave you a little baffled. Stylistically divided, the whole feels somewhat incoherent. But the good outweighs the bad, equaling a solid album.