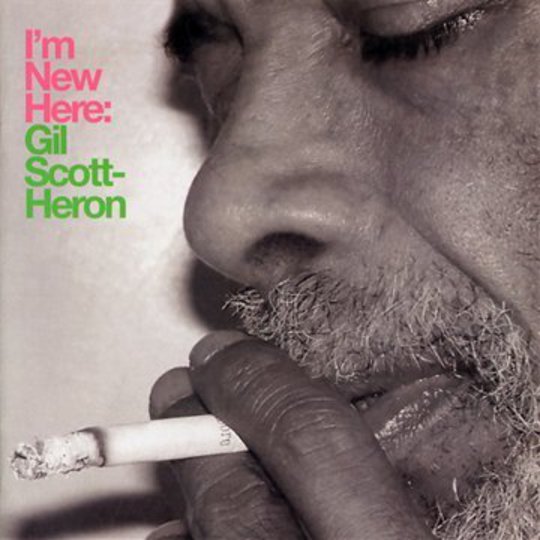 Without thought or reasoning, the new Gil Scott-Heron record seems to call to me at night. It makes sense there, in that sweet spot of the evening where the irritations daylight brings have faded away, and the dark, still night seems to hold possibilities other than recovery. Possibilities of introspection and recrimination, and the many other things which tend to happen at night. I’m New Here is most definitely not a morning album, or any other time of forced productivity. There is nothing forced about it at all, only a brutal honesty that is beautiful even when it is ugly, which is a round-about way of saying that it is dark, dark, dark, and great.

The album opens with spoken word track ‘On Coming From a Broken Home, Part 1’ which floats over a sample of ‘Flashing Lights’ by Kayne West to tell the story of Heron’s early childhood living with his grandmother in Tennessee. It sets out the theme of the record, confession, but no apology. “As every ologist would certainly note, I had no strong male figure right? But Lilly Scott was absolutely not your mail-order, room-service typecast black grandmother.” Such hymns of defiance run all through I’m New Here and Heron uses them to pick over the bones of his life, acknowledging the hard times and his own mistakes, but standing proud of all they have led him to become.

The Kayne sample indicates a change of direction; artists he influenced are now creating the sounds he draws strength from. How much of this is down to producer (and head of XL Records) Richard Russell is unclear, but whatever the case, I’m New Here sees Heron leaving behind the jazz/blues/soul hybrid he helped to shape on classics like Pieces of a Man for a heavily electronic direction which owes as much to the current dubstep scene as anything. His voice handles the change effortlessly, and although the years of hard living I’m New Here alludes to have left his voice fractured and prone to slurring, it has garnered other qualities along the way to compensate. On the title track (a cover of a Smog song) Heron’s voice is worn-in but radiates life, still deep, fat and majestic. All of him is crammed into every syllable, nothing is off limits, which is perhaps why he can take the words of Bill Callahan and absolutely make them his own. Heron’s well publicised troubles seem preternaturally suited to ‘I’m New Here’; when he sings “I did not become someone different - that I did not want to be - but I’m new here, will you show me around?” it becomes a powerfully self-aware statement as well as a request for help.

The rest of the album is peppered with covers; ‘Me and The Devil’ (Robert Johnson), ‘I’ll Take Care of You’ (Bobby Bland) and short poems set to dark electronic backgrounds. Although the resulting record clocks in at a trim 28 minutes, it contains such multitudes that it never feels underdone. The one substantial original song on I’m New Here is the fantastic ‘New York Is Killing Me’, a bombastic mix of blues and electro, with some handclaps and gospel on the side. The verses features some tasty reversed synths and some of that brilliant Gil Scott-Heron humming which Blackalicious fans will know all about, when the chorus kicks in the song sidesteps into a place reminiscent of the Alabama 3 track used for the theme tune of The Sopranos.

The album ends, as it began, with a discussion of Heron’s childhood set to a sample from ‘Flashing Lights’ and the man himself standing tall and proud of everything and everyone that has led him to where he is now. Whether these 15 tracks have helped him lay some demons to rest is impossible to say, what’s beyond all doubt however, is that I’m New Here is a seriously good record.