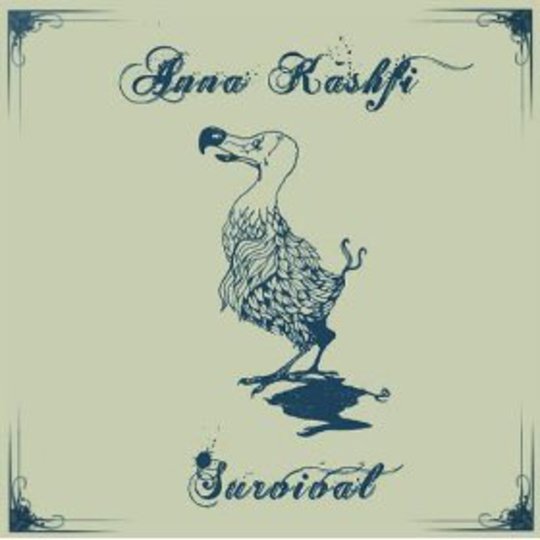 Manchester-based Anna Kafshi pivot on the central twosome of vocalist Sian Webley and multi-instrumentalist James Youngjohns, augmented live (and in-studio at regular intervals) by a lengthy roll call of supporting folksters. Which is vaguely confusing, given that they collectively share a name with Marlon Brando’s ex-missus, a faintly tragic Fifties starlet whose world caved in when it was revealed that her Hollywood-prized Indian exoticism was somewhat undermined by a youth spent as a butcher’s apprentice in Cardiff. In this respect, it’s easy to draw a few superficial parallels between band and namesake: while there’s nothing at all disingenuous about Webley and Youngjohns’ musical output, they certainly flit between some defiantly atypical genres for a whimsical, vaguely soporific north west folk duo.

Survival is their fourth long-player, a furiously style-hopping collection on which ‘The Loser’s Prize’ proves an early highlight - distinctly gospel in the way its (at least) four-part, multi-octave a cappella harmonies roll over and drip through each other, richly yet forlornly. It projects an instant mental image of some vaguely creepy white-robed chant-along in the shallows of a great glacial water. In fact, it’s only really Webley’s endearingly unadorned UK accent - and the faintly jarring appearance of the phrase “penny to a pound” a third of the way in - that stops it from sounding like an off-cut from the O Brother, Where Art Thou? OST. Which is no bad thing at all.

‘Drinker’s Song’ immediately brings the instruments back to the fore, Youngjohns’ artfully gouging acoustic pluck providing footholds for a sinewy violin to scale the tune up to its very rafters. Meanwhile, somewhere in the half-light below, Webley recounts a cloudy tale of a relationship wearily shifting its footing as the years fall away. Seconds later, like a well-aimed banjo to the arse, 'Red Rag Doll' shatters the smoky-eyed reverie by twanging us right back into the gutbucket heart of bluegrass country. The latter’s core refrain actually sounds just like Black Rebel Motorcycle Club’s 'Ain’t No Easy Way', and - as with the BRMC’s venture into such relatively alien territories - there's a faint whiff of back porch karaoke about the whole thing, effective though it is.

A much neater fit for Webley and Youngjohns’ talents are the likes of ‘Devil’s Bridge’, a darkly dew-soaked pagan hymn in the classic border ballad tradition, and the wartime ukulele shuffle of ‘Your Baby’. Elsewhere, the duo explore disposably twee jazz lullabies (‘The Church On The Village Green’), electro-bruised avant garde cinematics (‘String Loop’, which suits Webley’s occasional Beth Gibbons tendencies particularly well), and Dolly Parton-esque country pop (‘Bumblebee’) without ever really tripping themselves up in the continual switch-overs.

Ultimately, the fact that Survival flat refuses to linger in any single camp for more than one song at a time is both a curse and a blessing. In many ways, it’s a record tailor-made for the alleged listening habits of the iTunes generation: it sits far more comfortably on the ears when broken up into smaller chunks than it does when attempting to tackle it as a cohesive whole. Doing the latter gives it an air of restlessness and indecision, which is very much at odds with the self-assured languor of Webley and Youngjohns’ delivery.

Youngjohns’ production work is deserving of praise - much to its credit, Survival manages to sound warm and intimate even while riffing on chilly and distant - and yet it remains an album that begs to be digested in a live setting, where all this mercurial genre-jumping would come over as more showcase than showboating. That said, there’s much to like about Anna Kashfi’s ability to suck in so many disparate styles, then shatter and refract them with kaleidoscopic results: this is a record that it’s as hard to feel bored with as it is to feel perpetually engaged.