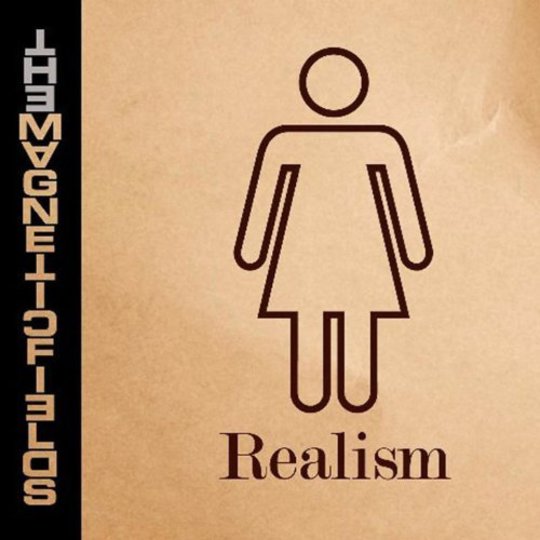 The Magnetic Fields write Eternally Great Pop Songs. Have since 1991, will, we hope, for years to come. Stephin Merritt conceives infinities of combinations of a foolhardy formula, and minor key changes to patterns of romance-filled composition enable this: a ninth album in the name of reality, truth, and all-acoustic recording. Realism stands as the flipside to 2008’s Distortion, whose electric guitars and fuzzy amplification produced a blend of honey power pop reminiscent of The Jesus and Mary Chain’s Psychocandy. Realism does away with this temporary rock aspiration, returns to non-amplified orchestration, and stops flirting with feedback, as Merritt again says, ‘I Love You’ through his characters’ songs.

Here are some elements of The Magnetic Fields’ formula for attraction:

“If you think you can leave the past behind/You must be out of your mind” chimes the opening track ('You Must Be Out Of Your Mind'). The sound of Magnetic Fields’ past is, at times bitterly, sweet, submerged in recurring relationships whose tales are told in lyrics, whose memories return to the melodies of affairs once had.

Pop equals light and light equals life. Airy vocals, delicate as bubbles, float about keyboard and auto-harp on ‘Interlude’. On ‘Painted Flower’, carousels swirl and petals are pleated in the wake of co-vocalist Claudia Gonson’s words. But by final track, ‘From a Sinking Boat’, the dusk has come, and Merritt sends his tuneful woe out to sea.

A doll’s tea party with Chinese ma-jong and music-box melodies broadcasts a pseudo-nursery rhyme charm. A man and woman recollect feelings from their childhood as they fight off at least half the shadow of loneliness together. A country hoedown kicks off, polka drums rattle, and Lemony Snicket author, Daniel Handler, even guests on accordion.

Inspired by British folk of the Sixties and Seventies, and particularly, by the work of producer-composer Joshua Rifkin on Judy Collins’ LP In Our Life, Realism is orchestrated with strings of several scales, from ukulele to harp to cello. A varied folkish shindig dances between the soft sentiments, both ‘real’ fun and carefully engineered to be pretty.

#5 The up-side of melancholia

The album flits between the sincerity of being lost for words, (‘I Don’t Know What To Say’), and the sarcasm of festive cheer, on novelty (belated) Christmas number, ‘Everything is One Big Christmas Tree’. Somewhere between the two, suggestions to drink a few, drown in sin and seduction, sit on the fence of sadness. Then sing along in celebration.

Possessing all the courtly candour of 69 Love Songs, these are the painterly depictions of a poet concerned with fall-outs and lock-ins, love nests and dry gin. Who knows what's real and what's not, but The Magnetic Fields write Great Pop songs, and this means a lot.