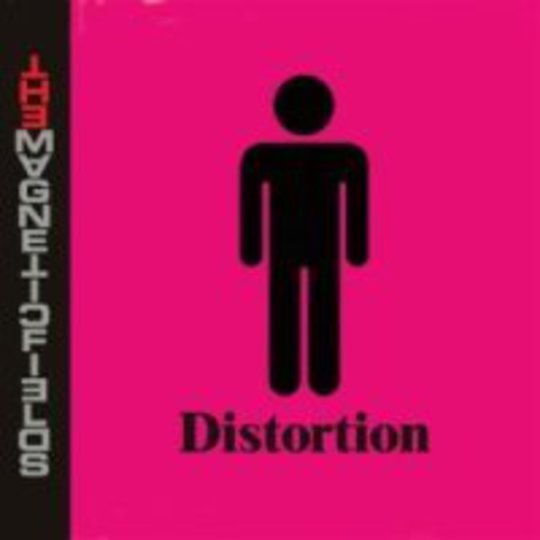 Aloof as a herd of nonplussed camels and even more blackly ironic, Stephin Merritt is a difficult guy to pin, alright. The Magnetic Fields’ lynchpin has even gone on record as saying that “sincerity has no place in popular music, any more than it has in cooking”, which is understandable but also risky, paving the way for the kind of blithely presented formalism which many felt blighted the band’s last collection, perversely titled i.

More so than the titular obfuscations which most immediately mark eighth LP Distortion as a departure from previous work, it’s this trait in Merritt’s songwriting which continues to equally curse and bless the band and will determine opinion on their relative virtues either way.

Merritt’s stated aim to produce a record “more Jesus & Mary Chain than the Jesus & Mary Chain” seems peculiar in light of his assertion that Psychocandy represents the last significant moment in popular music production, since such a remark can only raise questions as to the value in revisiting that sound.

In the event, it seems symptomatic of his wider fascination with form, leaving us with a somewhat arbitrary glaze of distortion that barely conceals Merritt’s usual dilettante’s approach to pop even while producing an enjoyable uniformity of sound which the likes of 69 Love Songs never aspired to.

That stylistic curveball summarily dealt with, we can get to the songs, which exhibit all of the band’s customary guile and deceptive sophistication. The near-instrumental ‘Three-way’ is an effective opener, all plangent surf guitar and a chorus section that sounds suspiciously like the Futurama theme tune.

‘Old Fools’ is a deliciously slo-mo slice of melodrama, and one moment where the record’s aural fog mirrors perfectly the emotional content of the music. Ditto the smudgy harmony parts and strings on the fragrant, soaring ‘Drive On’, which revisits the band’s sometime country fascination with heart-rending aplomb.

Elsewhere, ‘Mr Mistletoe’ and ‘Too Drunk To Dream’ offer potent reminders of Merritt’s ability and work wonders with the slenderest of conceits, snatching pearls from the leaden jaws of self-pity and booze-soaked oblivion. The former in particular sees Merritt relishing the opportunity to pout and mope in his lugubrious way: “Oh Mr Mistletoe, wither and die, you useless weed, for no-one have I”.

‘California Girls’ is a typically tuneful first single but, alongside the revolting ‘Zombie Boy’, brings us neatly to our aforementioned predicament. Their blasé treatment of decidedly risqué subject matter – one female subject driven to homicidal impulses by media images of perfection, and another protagonist driven to necrophilia by, um, sexual preference – flirts goadingly with one-dimensionality, and certainly one clings to the hope Merritt had some sense of getting away with it when scribbling lines like “no blood ever drips / when I widen your holes” (‘Zombie Boy’).

But ultimately those who complain about a lack of heart in The Magnetic Fields’ writing can't be looking hard enough, gluttons for arm-waving sincerity that we’ve all become - Distortion displays soul enough for anyone, and Merritt’s art remains strong enough to blow finely nuanced raspberries in the faces of his empathy-junkie detractors.

Save the odd occasion where Merritt opts for smirking affect over emotional resonance, it all adds up to an excellent addition to an already distinguished back catalogue.