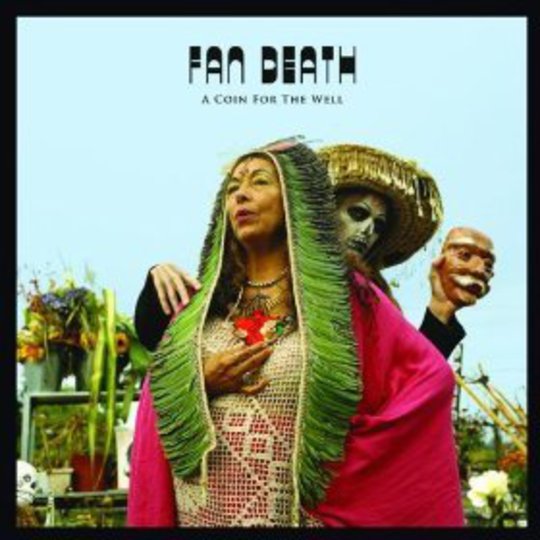 Those familiar with Fan Death's earlier 2008 single outing, 'Veronica's Veil', will be glad to know that in the not inconsiderable time since its release the Canadian-based threesome have not changed a great deal. Led by two pretty femme fatales on the mics and one presumably less pretty male producer twiddling knobs in the background, they're still pretty much the same band, doing the same thing.. While this may raise the odd cheer for the few that can remember that far back, it's difficult to know just how Fan Death fit into the greater scheme of things as we plough forward into 2010.

The problem with Fan Death is that their electro mishmash neither looks forward with a sense of invention – this EP ain't no [Fall Be Kind](article:4138534) – or back with a sense of reverence. Well alright, that's not quite precise. Fan Death's music does look back, but unlike the output of majority of contemporary electro artists plying their trade, A Coin For The Well sounds and feels like music this generation has only recently dispensed with. Yeah, Fan Death's sound is part disco, part synth – that's their big shtick. But it falls way way short of the slick polished-to-a-shine immediacy of MGMT or Empire Of The Sun; it lacks the Ready Break-pop easiness of Ladyhawke, and Fan Death simply don't yet possess the character-led charm of La Roux and Little Boots, no matter how pretty and demure the videos desperately try to be.

But charm in music is only ever an extension of music that charms. Put plainly, _A Coin For The Well_ isn't a revision of anything particularly satisfying, nor does it benefit nearly enough from nostalgia's rosy tint. If you rewind the clock a mere six or seven years you will have heard something very similar to the string-heavy, gay bar-friendly 'Cannibal' spinning on the decks of once-upon-a-time Radio 1 A-listers such as Pete Tong and Danny Rampling. The slightly better lead single, 'Reunited' is, sadly, too similar to Kosheen's 'Hide U' to be of any genuine interest, nine years on from that particular house benchmark.

Disco purists may find some solace in overplayed strings and typically uplifting melodies and these songs may sound OK, as they bludgeon eardrums in a club, but disco's soul is sapped from the EP by the now mandatory inclusion of icy detached vocals and purposefully lo-fi synth textures. The result is something that, sonically, sounds almost uniformly half-arsed. Listening to A Coin In The Well is like watching two embarrassingly rotund heavyweight boxers. Every underpowered, misdirected blow a rippling sea of vibrating pink flab.

If there are two types of EP release – the ropey time filler and the occasionally very pleasing momentum builder/maintainer – A Coin In The Well is a classic example of the former. With an album scheduled for the spring you'd probably be better served looking into the real meaning of fan death. Unsurprisngly, it remains the most noteworthy thing about this band.