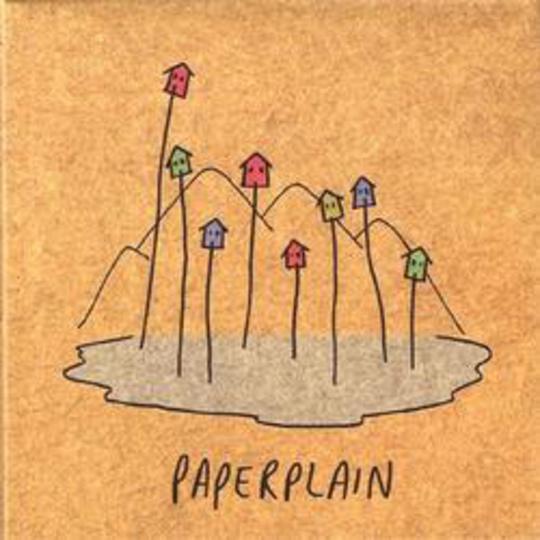 Precocity in music is most remarkable when it becomes irrelevant, when a youngster makes music that isn’t just impressive for their age it’s genuinely impressive. Helen Page (aka Paperplain) is precocious, not a child prodigy but probably a prodigiously talented child. Most of this mini-album was written and performed when she was just 16, which is more impressive still because she recorded every note herself and arranged every track. Though it may be unjust to take age into consideration, it seems inevitable. Entering Pale Town is a pleasant album; it is promising and even exciting. Yet it doesn't quite stand up to objective scrutiny or lack of allowance for youth. It lacks the mature emotional impact or intensity that may come from living a bit more and doing a few more things. While good in parts it suffers from being both a little too pale and a little too plain.

Paperplain’s sound is a stripped back folky one. Page’s soft voice is restrained, often almost speaking rather than singing. Her simple guitar playing is nicely arranged and occasionally joined by a percussive clap or the odd piano, though the quiet and gently mournful vocals that are indubitably the best thing about the album.

The opening track and first single is 'Pale Town'. The instrumentation is cleverly arranged: after an incongruous ringing-phone sample, a melancholy piano riff is repeated throughout, building and increasing in tempo to a restrained yet rousing finish. The song evokes absent friends and includes the beautiful rhyme, “you were talking faster than the ripping of a plaster.”

Page is fond of a slowly building sound. Another song that employs the technique to good effect is 'Rescue Boat'. More restrained guitar plucking provides a background to a song with a quietly stirring message. The vocals are stressed on every second beat, making it sound like a mysterious, modern nursery rhyme.

The album does contain a number of missteps. The down-tempo 'Spin Wheel' is both dreary and dull. 'Foreign Fingers' combines Page’s youthful earnestness with trite lyrics about “big cozy jumpers” and “salty popcorn.” Along with the misjudged hand clapping it dilutes the maturity demonstrated on previous songs.

A useful comparison can be made to Laura Marling. Marling’s voice has an astounding maturity and complexity to it that is certainly more striking than Page’s. Marling also wrote and recorded a lot of music when she was 16, though thankfully never actually released it (ie. it was apparently shit). Marling herself acknowledges this and the growth her music went through in just a couple of years is remarkable, to the point where now she is producing some of the most beautiful folk music in the country. Page’s early work is more interesting than Marling’s. If she can improve as much her peer did, if she can add some ambition and richness to the sound, perhaps take a few more risks, then Paperplain’s next or subsequent records could be something truly great. Maybe one option would be getting Charlie Fink to produce her first album and then sleep with him. This shouldn't be encouraged as she’d probably just break up with him and no one deserves another Noah and the Whale break-up album, not even Charlie Fink.