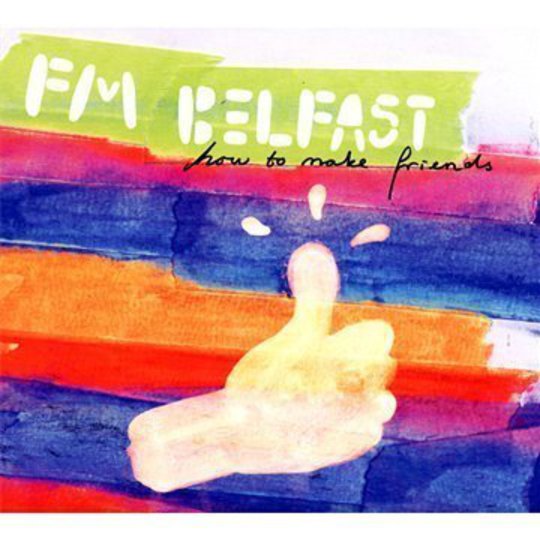 Psychogeography is all in music. It's impossible to imagine For Emma, Forever Ago to come from anywhere but a log cabin in Wisconsin. Try and separate the Velvet Underground or The Strokes from NYC. Geographic origins impact everything – rural/urban/north/south, etc, etc, etc. Iceland has always had its own particular psychogeography, musically, from Bjork, to múm, to Mugison, to Sigur Rós, a certain thread of organic electronica, and a connection to the wide wastes of glacial volcanic landscape.

FM Belfast eschew these traditions. This is music for the club, for the city. It's a rejection, perhaps a concious one. On 'Underwear' they answer - “We come from a place where we count down the days / Until nothing, until nothing, until nothing.” So you create your own entertainment. “We are running down the streets in our underwear.” Much like The Hives-esque suburban punk of the (sadly) deceased Jakobínarína, FM Belfast are disaffected youth. They reject the naturalistic, rural conventions of Icelandic electronica, and fire square at dancefloors, late night radio, wherever.

They draw instead from the urban, the modern, and technology. Making a bid for public information films worldwide, 'Frequency' conveys the important message – “Put down that glass baby / You're the designated driver.” Songs draw on the minutiae of life – 'Optical' is, and I quote, about “The joy of getting your vision back by buying a pair of spectacles.”

There are two covers here – first, a slow jam of Technotronic's 'Pump Up The Jam', words enunciated slowly, as if it's being used as practise for an English oral. It departs into different territory, sparser, a solitary keyboard line and sparse drumbeat replacing the early techno. It's no longer a song for middle aged spread coated ladies to do their aerobic step ups to. Later, a perky keyboard led version of 'Killing In The Name Of' appears (titled 'Lotus'). In terms of canny cover choices, it ranks high, recorded well before the successful campaign to create the least festive, most cringeworthy number one in recent years. FM Belfast succeed in their cover, simply because it doesn't sound so much like a tedious teenage rebellion any more, but more like a defiant stating of their desire to dance.

The rejection of their psychogeography is not complete. The gravitational pull of The Knife's Nordic crystalline constructions circa 'Heartbeats' can be felt throughout, on tracks like 'VHS' and 'President'. The title of one track – 'Synthia' – sounds like a Christmas cracker joke yet to be invented. It does provide an apposite example of the weakness of How To Make Friends: its reliance on the keyboard, computer and synthesiser. Were the music not as joyous, focused as it is on nights out with alcohol and friends and too loud music and (the overarching theme) escape, then this would become as boring as what they're trying to flee. Instead, these tales of alienation work. The sentiments of not fitting in are universal, everywhere.

Maybe this is all a response to Icelandic prodigality, the financial collapse, the high cost of living. The claustrophobia of living on an island with a population on a level with Coventry. On 'Par Avion', over horns and whooping vocals, they declare their wish for a home in the Caribbean. As recent events, with the Icelandic government deciding not to pay back other countries for the collapse of their banking system, are as good a representation as any that the articulation of dissatisfaction doesn't put them at odds with the system. FM Belfast may reject the traditions of their own county's music, but they slot very much into the tradition of Icelandic rebellion, and tether it instead to the synths of Scandinavia, pumping them up with their own innate sense of fun.