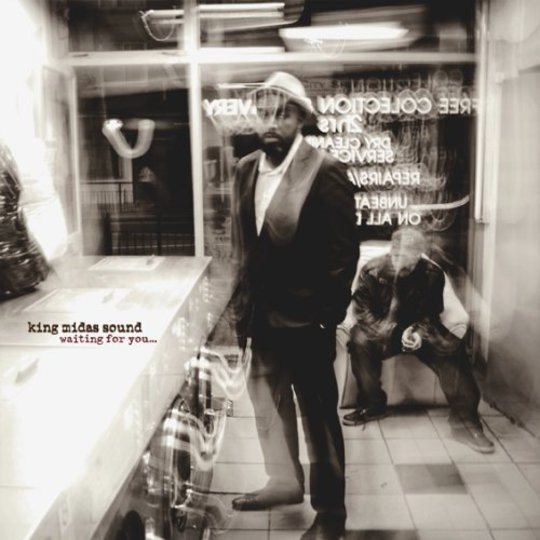 A flashing LED on the abandoned mixing desk beats an off-centre syncopation against the sparse kick-snare pattern, emerging from the three backlit, clouded figures ahead. Behind whispered dub poetry and ghostly, barely-there wisps of feminine voice, the sub-bass is a shadow, a thick and viscous tar that binds each base element to one another, creating an elastic structure with room to flex. Voices flit from speaker to speaker, thrown back and forth between the two central figures like weapons – sometimes soft and blunt, occasionally vicious and barbed, as croon gives way to hard-edged spoken word.

King Midas Sound’s performance at Hyperdub’s fifth birthday party last month was an early revelation, proof (as if any more was needed) of Kevin Martin’s sizeable versatility and vindication of the more contemplative moments of The Bug’s London Zoo album. Despite its fragile nature, Roger Robinson’s voice is a huge physical presence, creating an unbearable intimacy and closeness that perfectly mirrors the all-encompassing nature of the bass that enshrouds him like mist – a reflection occasionally multiplied by Hitomi’s sharp, sexually aggressive stage whispers. As well as continuing to mark out Hyperdub’s unique space in modern music, regardless of genre, the trio’s debut album Waiting For You manages to summon up ghosts of distinctly British urban dread, while at the same time harking back to its originators’ respective backgrounds.

With the benefit of hindsight – of which Waiting For You forms an inseparable part - Robinson’s contribution to London Zoo, ‘You And Me’, may well have been the album’s finest moment. At the time, his calmly forceful ruminations were lost amongst the jungle of distortion and ragga aggression that characterised ‘Jah War’, ‘Poison Dart’ and ‘Murder We’; given an album’s length to breathe they expand to fill its psychic space with ease. Opener ‘Cool Out’ is as frosty as the name suggests, Robinson’s breathy androgyny effortlessly raising “pure love vibes from the ground” and establishing an eerily calm atmosphere, in stark contrast to Martin’s restless percussion.

Elsewhere, the walking bass of ‘One Thing’ channels dub reggae’s skeletal structure through night-bus ambience worthy of Burial’s self-titled record. By the time ‘Meltdown’ leers oppressively forward the low-end has markedly grown in stature, switching role from anchor to spacemaker and carving out deep rifts, even on a pair of cheap headphones. Most striking of all is the moment where Robinson moves from default mode to deep-voiced poetry, the deadpan warnings of ‘Earth A Kill Ya’ appropriate for a month of doomed climate change talks in Copenhagen. Hitomi’s backing vocals become increasingly apparent towards the album’s tail end, gradually ratcheting up the terror level from amber to crimson by time of ‘Goodbye Girl’s thinly veiled threats of “I wish you luck with a capital F”.

It’s difficult to numerically rate an album that essentially defines the term 'slow-burning', and I have my suspicions that time will prove that this score should be far higher. Make no mistake – Waiting For You is hardly the kind of record that grabs and demands your undivided attention. Instead it offers gems buried deep amongst its cityscape’s gently fluorescing streetlamps and slow-moving traffic, crafting a distinctive, defiantly twenty-first century urban soul music that, given due care and attention, leaves an afterglow simmering long after the CD spins to a halt.