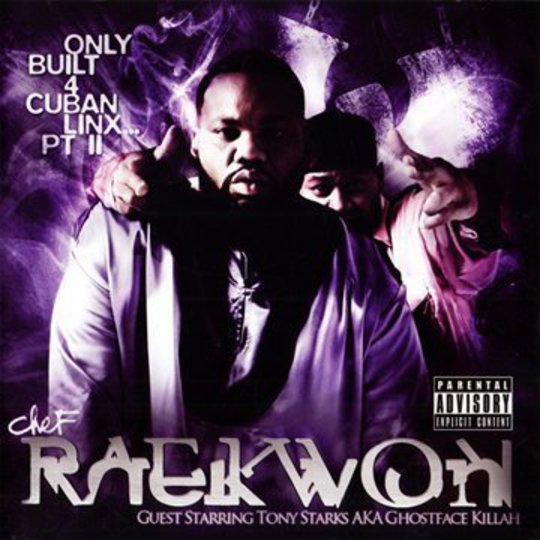 Hip-hop has been undergoing something of an image shift over the past few years. Kanye West might be to blame, his verbiose and hopeful rhyming sitting quite comfortably with his 808 loving MOR listeners. Or maybe it’s the inimitable Jay-Z, lazy and limp in his old age (the excellent Black Album excepted), supporting Coldplay of all people.

But whatever your opinion on the reasons behind it, fact is that there hasn’t been a really gritty rap album released since, oh, Clipse’s coke–hop masterpiece Hell Hath No Fury. That all changed earlier this year, though, as (Chef) Raekwon, arguably the most talented of all the Wu-Tang collective, releases the highly anticipated Only Built 4 Cuban Linx Pt II.

Given that the first edition of OB4CL was rightly revered as one of the all time great hip hop records - alongside other Wu creations such as 36 Chambers and GZA’s Liquid Swords - expectations have been high. And for once, the hype is nearly completely justified. Clocking in at a rather bloated looking 77 minutes and 24 tracks merely disguises that almost all of OB4CLII is gold plated.

Soul tinged opener ‘Return of the North Star’ eases the listener in, Rae listening to advice from a sage voiced father figure, before the album proper kicks in with the J-Dilla (the much missed producer seems to be overtaking the Notorious B.I.G. and Tupac Shakur in terms of output from beyond the grave) produced ‘House of Flying Daggers’, a mean statement of intent that marches forward on frantic strings. The lyrics are typical Wu Tang fodder, at once flowing and scatterbrained, the four MCs tag teaming about drug dealing, gang warfare and rap potency. But it’s left to Inspectah Deck to sum up the point best “See the murals on the project walls/ won’t stop till I got them all” before a potent chanted chorus kicks in: “Soldiers in the front/Let the heat pump/Troops on the left/fight to the death/Fam on the right/Infra red lights/Wolves in the back/Ready to attack”.

It sets the bar high, and if what follows rarely outjumps such a potent statement, it never dips significantly below. ‘Sonny’s Missing’ recants a storyline of drugs, murder and torture straight out of The Wire in brutal detail, only for ‘Cold Outside’ to hit with a lethal dose of pathos, borrowing a broken mariachi trumpet hook and a warm soul vocal to match it’s mournful paean to hood life: “Real life stories is made/And candles got blazed for little young soldiers/shot by them strays”.

Those two tracks demonstrate why OB4CLII’s is a lyrical success – Rae might lace his lyrics with bragging stories of stick-ups, murders and drug deals, but he’s a storyteller with enough nous to divert from his theme once in a while. As such ‘Gihad’ opens with the Chef railing against vintage clothing and half moon specs, before Ghostface Killah adds some hilarious rasping filth about screwing around with his buddy’s girlfriend who “take a dick like a ribeye steak”. And of course, Rae gets a little teary eyed during a lovelorn tribute to Ol’ Dirty Bastard in ‘Ason Jones’: “An’ now I understand the meaning of love/When I kissed the nigger.”

But that lyrical versatility is only half the story. It’s the often perfect synthesis between lyrical content and production on OB4CLII that makes the album simply sublime. It’s all the more impressive given the vast array of contributors behind the desk. Raekwon’s own work, a thundering string section riff on ‘Canal St’ more than holds it’s own against the RZA’s eerily synth laden ‘Black Mozart’ or Dr. Dre’s steel drum powered ‘Catalina’.

I could go on, dissect every track piece by piece like the forensic investigators described in ‘Surgical Gloves’, but there really isn’t any need. OB4CLII is quite simply one of the best rap records released this decade: literate, funny, dark, evocative and meaningful all at once. Perhaps the best measure of its strength is in how deeply I; a middle class white boy, am prepared to listen to every word involved. And when Rae asks me to ‘Kiss The Ring’, you know what, I just might. He’s earned it.