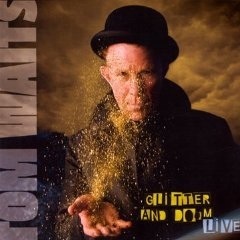 If you were there you’ll be prompted to bask in the memory, and if you weren’t you’ll be wishing like hell that you had been. »

ltd 7 inch exclusive sold out- if you order now you will only get the standard album.'glitter and doom live' is a collection of outstanding live tracks from his 2008 sold out us and european tour this november. this two cd set contains 17 live recordings from ten nights along the tour including, birmingham, edinburgh, tulsa, knoxville, atlanta, paris, milan, jacksonville, dublin and columbus. the second cd entitled, 'tom tales' holds nearly 40 minutes of waits quixotic ruminations on topics ranging from romantic spiders to injured vultures. the cd also comes with a booklet of live photos. musically, the live discs encapsulate waits in all his chug, boom and steam. his shamanistic vocals, innovative arrangements, visionary lyrics, pounding rhythms and emotional melodies are all here. there are dark swampy tribal rhythms, ominous hymns, and cautionary tales all swirling around waits' unmistakable howl and croon. the cd has a dead man singing to his widow, a convict's last words, an instructional dance number, lamenting sword swallowers and bragging pirates. all of the tracks were personally selected and sequenced to give you the feeling of one great night on tour.
description from www.roughtrade.com