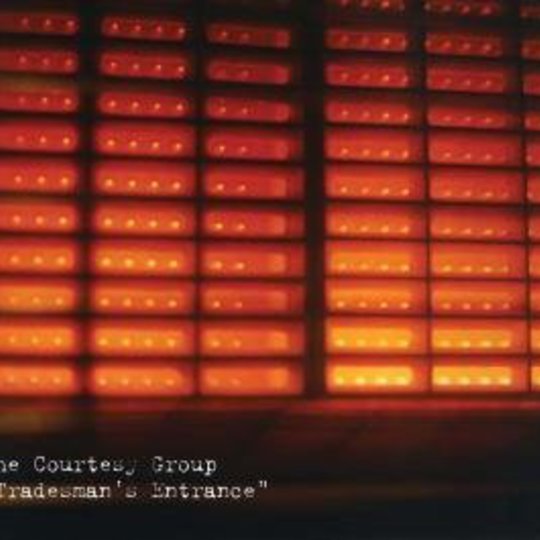 Show a man a football match and he will tell you how best to manage the team. Give a man a map and he will be able to navigate from A to B. Give a man a microphone and he will sing. Give him five more pints and he will put the world to rights, he will think himself a poet, the way he stands there, slumped on a counter, telling you this and that, rambling incoherently to everyone and no one. If you put him on stage and give him a microphone does it automatically make it poetry? Where does spoken word performance stop, and bumbling drunkard start? I couldn’t say for sure, but Al Hutchins, vocalist of The Courtesy Group, comes very, very close to crossing that threshold.

Throughout Tradesman’s Entrance he delivers his lines in a fashion not too far removed of that of John Cooper Clarke, a harsh, gritty northern voice with too many opinions to keep to himself. His subject matter is concerned with almost nonsensical word play and psychedelic imagery, a kind of re-imagining of Kubla Khan seen through the eyes of a provincial Midlander. But what of that line between spoken word and incoherent ramblings? Is there any real separation? What of poetry versus rock lyricism? Can one be considered more of an art form than the other? If you’re not sure of your strengths as a spoken word artist, get some mates in and form a semi-improvised rock band. Hutchins’ lyrics, originally carted round in a series of Aldi carrier bags (plastic bags add gravitas), may not work well as spoken word pieces, but against the backdrop of The Courtesy Group, they fare better. Or it could be that they’ve buried the vocals just enough.

The real strength of The Courtesy Group lies with its musicians. Operating in a tight, sometimes psychedelic, sometimes ferocious post-punk pocket, they tread somewhere between The Fall and Captain Beefheart. The guitars (provided by Fyfe Dangerfield from Guillemots, Hutchins' brother) are sharp and spiky, like razorblades or shattered glass, covered with copious amounts of reverb; the bass gallops and rolls whilst drums clatter.

‘You And Your Grinding Service’ sees The Courtesy Group doing their best impression of The Birthday Party, one that they pull off very well, complete with plodding half time drums and an approach to blues guitar that sounds less like playing the guitar and more like trying to drown it in a swamp. At the more ‘pop’ moments which litter Tradesman’s Entrance, such as ‘Mirrors R Us’ or ‘Less Old Air’, when they go for a big hook instead of a heads down post-punk assault, The Courtesy Group somehow manage to sound like The Arctic Monkeys. I don’t know how they’ve managed it, but they do. Maybe a bit of The Coral thrown in there as well. These moments are sparse though: most of it still sounds like The Fall.

The weakest aspect of Tradesman’s Entrance really is the vocals. The instrumentation sets the bar high and the vocals fail to rise to the challenge. Maybe that’s why they’re so quiet. Of course if the music was matched with different vocals then there would a good chance that it would take away from the charm of the rest of the album. As the old saying goes, if it didn’t have the part that sucked, then the part that didn’t wouldn’t seem so good. And that’s the key to good art.