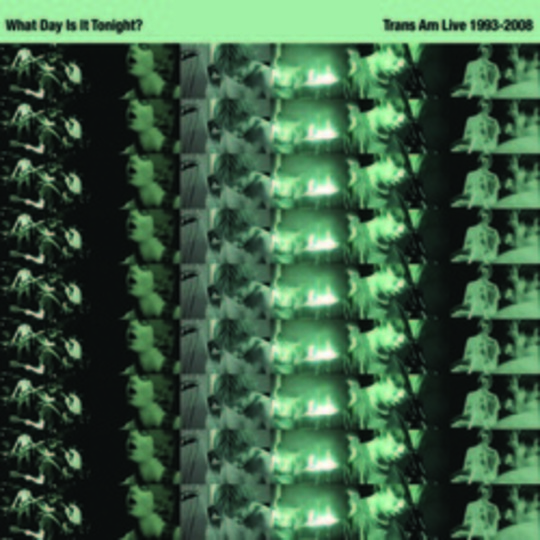 The members of Trans Am appear to motivate themselves in much the same way as the owner of a donkey might keep a carrot perma-dangling just out of reach. Except, in their case, they have a gigantic jar of Ritalin swinging on a string in front of them. It’s the only way to explain their agile take on rock, which has the ability to match eternally cool reference points (Can, Kraftwerk, Yellow Magic Orchestra) with the worst Seventies excesses (Yes, Styx, Boston). As a result, their output has veered all over the place, and What Day is it Tonight?attempts to pull some of those strands together in a live album culled from many different tours spanning 1993-2008.

‘Firepoker’, from their 1996 debut, is the earliest example of their work here. It’s built from a prog-y base, with Rick Wakeman-esque zaps of keyboard vying for space with thunderous slabs of bass, building a feeling not unlike Goblin’s soundtrack work for Dario Argento when they shy away from terror and bring in a few screeching guitar solos. Trans Am’s follow-up, Surrender to the Night, is briefly plundered for the whistling riff of ‘Köln’, while the subsequent The Surveillance is, perhaps surprisingly, not represented.

The latter began Trans Am’s shift toward heavily vocodered vocals, which continued with 1999’s outstanding Futureworld, which has three tracks reproduced here. ‘Television Eyes’ is a synth and bilious riff monster not dissimilar to ‘Firepoker’, but this time with Nathan Means’ vocals splashed all over the top. Here, the synths take on a New Order-ish Eighties hue, while the vocals often resemble those of the band’s obvious idol, Ralf Hütter. Hütter’s presence can be felt again on the retro-futurist clomping synth-rock of ‘Futureworld’, which has thematic ties to Kraftwerk’s Computer World, and sound like the Glitter Band if someone had shoved a bunch of old keyboards in their hands.

Tracks like ‘Futureworld’ and ‘Play in the Summer’ (from Futureworld’s follow-up, The Red Line) are where Trans Am really excel. Both contain elements of the humour they are well known for, but also demonstrate some considerable pop-writing nouse, with ‘Play in the Summer’ hitting its stride via a rippling guitar solo and a simple vocal coda. Their natural inclination always seems to be to throw a spanner in the works, but when Trans Am quash those desires they’re capable of mining crackpot pop territory that places them in a direct lineage with the likes of Sparks and the Residents. And talking of spanners being thrown, the wince-educing electroclash spoof record, T.A., is mostly left alone here, save for a reworking of ‘Positive People’.

The recent studio output in the Trans Am canon, their political album from 2004, Liberation (a mostly instrumental record, natch) and Sex Change, from 2007, are both represented. ‘Outmoder’ from the former still sounds like a wonderfully steely slice of robo-rock, combining skeletal guitars and a Devo-like structure in a song that the late and dearly lamented Brainiac would have been happy to call their own. Of the Sex Change material, ‘First Words’ still resembles the sound of a band getting back to the essence of what made it great in the first place (as much of that album did), and who can resist a track named ‘Tesco v. Sainsbury’s’? My heart will always belong to the latter.

There is no Trans Am greatest hits package in the offing, so this is about as close as we’re going to get to a career summary of the band to date. To the novice listener, it won’t make a whole lot of sense, fails to indicate any kind of coherence to their overall output, and is probably not the best place to get to grips with them (although where that would be is anyone’s guess). This, no doubt, is the whole point of Trans Am — to confuse and confound, to take inexplicable U-turns just to see what happens, to irritate and amuse at the same time, to lurch from incredibly catchy pop to attempting a critique of the war in Iraq in an instrumental format. It’s the kind of risk-taking that most bands are far too self-aware to ever seriously consider, which makes Trans Am’s lack of fear at falling flat on their faces their greatest virtue. Thankfully, some 16 years into their career, What Day is it Tonight? feels like they’re only just getting started.