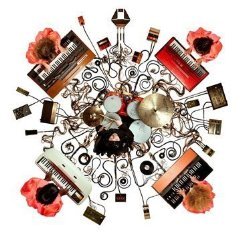 Sisters of Transistors - At the Ferranti Institute

Graham Massey has been making records for longer than the sapling writing this review has been alive. Some might say this means he»

the album comes in a special pvc pouch containing extensive research documents and reports. sisters of transistors came about through a research project embarked upon by graham massey 'at the ferranti institute' and at his own facility, the south manchester museum of keyboard technology (smmokt). the aim of the project was to as closely as possible replicate the work of lillian meyers using only vintage transistor organs. applications for the quartet were taken from across europe, the four were formally announced and named during a ceremony on august 4th 2007. the inner workings of sisters of transistors remain something of a mystery. the quartet meet weekly behind closed doors at smmokt. the sister's time is roughly divided into activities such as electronics seminars, soldering or choir practice and gossip is strictly limited to only 20 minutes per session. outside of smmokt the quartet diligently spend their time on an array of fund raising activities which help keep the research faculties at smmokt going, it is worth keeping an eye on the manchester evening news for details of the next wayward wives jumble sale or bonfire. as far as the music goes, despite the sisters dedication to make music in an environment free from the influence of other musicians (ipods are confiscated on entry to smmokt) it's hard to talk about their sound with out referencing artists as diverse as goblin, magma, ennio morricone, the shangri la's, manuel gottsching and the b52s. the debut album 'at the ferranti institute' is released by the estimable this is music label.
description from www.roughtrade.com