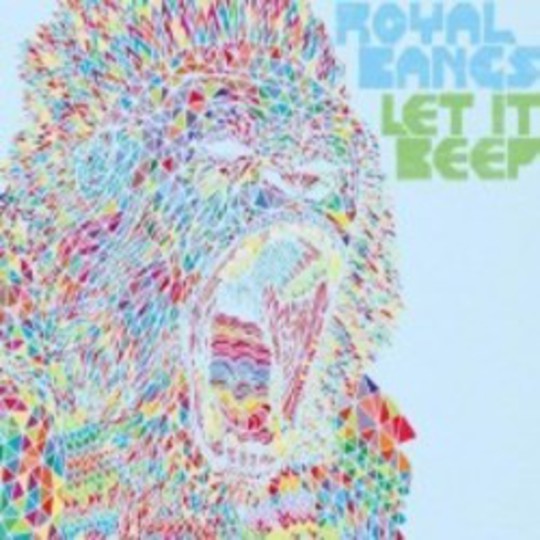 Let it Beep, the follow up to Royal Bangs’ debut We Breed Champions, is a record that doesn’t quite know what or where it wants to be, yet in the ensuing chaos manages to emerge victorious, if a little dishevelled. Wearing their influences on their sleeves, Royal Bangs slip seamlessly from one direction to another. Let it Beep is a hodge-podge of angular early Noughties indie influences: scuzzy southern rock a la Black Keys (the drummer of whom, Patrick Carney, runs the label on which Let it Beep was released) and 8-bit craziness.

Indeed, the move towards realms more electronic was spurred on by front man Ryan Schaefer’s hiatus in France where he allegedly 'spent a year… soaking up Euro dance music and entitlement culture'. I’m not sure quite what has been gained from living in a culture of entitlement, but in terms of the at times ravey electronic cameos that pervade the album, particularly in the likes of ‘Conquest II’, the hiatus was one well worth taking.

Having heard that their new direction encompassed two divergent trends, mixing 'spastic, syrup-thick synths' with the Seventies rock of Springsteen and Thin Lizzy, it's not unreasonable to be slightly apprehensive as to what the bastard child of these vastly different genres would sound like. You needed worry too much, as somehow it works. The 8-bit freakouts occasionally seem a bit forced, as if added on as an afterthought, but in general work well with the whiskey soaked lo-fi rawness of their Southern Rock. It would, however, be disingenuous to label the music as merely a hybrid of these two forms. The first two tracks display Royal Bangs' summery indie pop side, pointing the way to acts such as Broken Social Scene - nothing particularly mind blowing but pleasant all the same. It is at track three, with ‘My Car is Haunted’, that the band truly announce their arrival, a rough round the edges funky offering dripping with hooks. Indie over the last year or so has hit a trough, with a seemingly never ending list of acts that are thoroughly average, not even possessing the redeeming feature of being catchy. Perhaps it is due to this dearth of good guitar pop that makes ‘My Car is Haunted’ seem like a breath of fresh air, or perhaps it is purely because it’s a bloody good song.

The first direction change in the album takes place with ‘Brainbow’, a song which displays their European electro influence, packed full of vocoded vocals and distorted synths that is somehow reminiscent of T.A.T.U., in the best possible way. The other two stand out tracks on the album, ‘Tiny Prince of Keytar’ and ‘Gorilla King’ further display the versatility that the band hold in abundance. The former a lovely garage rock ballad, almost shoe-gazey in its wistful and melancholic tone with hints of Ratatat and a recurring chorus of “don’t worry, I’ll take care of you”. The latter is a track that changes twice, with an interlude that any SNES game would be proud of.

While the plentiful volte-faces through the album may initially smack of indecisiveness, after a few listens they grow on you, lending a certain charm to the album. Their inability, conscious or not, to find a middle ground, makes Let it Beep sound original, fresh and distinctive. Paradoxically, considering the fact that listening to the record immediately produces a flurry of audible déjà-vu moments, they do manage to hoist themselves off the conveyor belt of copy-cat indie bands and stand on their own two feet. If you manage to stand back from trying to over-analyse and contextualise their sound, you are ultimately left with a record that is catchy, unashamedly self indulgent and in all senses, fun.